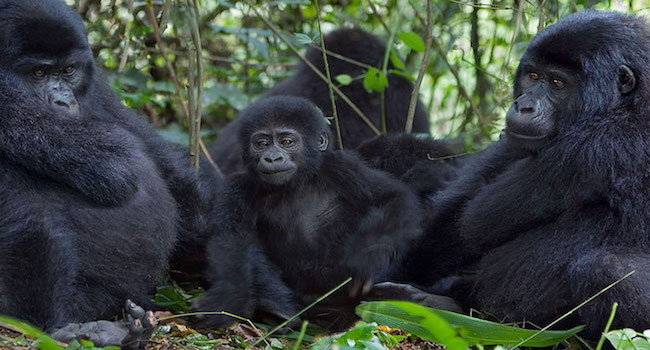 Mountain gorillas are exclusively found in only two locations which include the Virunga Mountains which straddle the borders of Uganda, Rwanda and Democratic Republic of Congo (DRC) with 3 national parks and in Bwindi Impenetrable National Park in Uganda.

Unlike most of other gorilla species whose population has been decreasing and are now critically endangered, mountain gorillas have been steadily increasing in number and are no longer considered critically endangered with about 1,063 individuals in the wild. Their increase has been as a result of combined conservation efforts by wildlife agencies and non-government conservation organization.

The successful conservation of mountain gorillas has also promoted gorilla tourism in the 3 countries with thousands of travelers across the world coming for gorilla trekking safaris to see these amazing gentle giants in their natural habitat.

Mountain gorillas, which share about 98 percent of the human DNA are associated with many exciting and amazing facts and here are some of the most strange ones;

1 Gorillas are not 100% vegetarians

Gorillas are surprisingly not 100% vegetarians contrary to what many may think simply because they eat their dead babies, what a shock! Gorillas don’t hunt any other animals for meat except of recent where some were observed eating snails. However, although gorillas share the meat of their dead babies, they don’t eat dead adults. Experts in gorilla research explain that gorillas keep a dead baby for some days thinking that its still sick until the body starts stinking and this is when the mother confirms that its dead. At this point, the mother informs other members about the demise who come and share the meat and this is because they don’t want to leave behind the dead baby to be eaten by other animals like cats who may start hunting the rest of the gorilla babies after testing their meat.

2 Mountain gorillas were discovered 98 years ago

Mountain gorillas were discovered as a new species of gorillas by Captain Von Beringe on the 17th of October 1902 and this is how they got their scientific name, “gorilla gorilla beringei”.

Just like people, gorillas also have emotions and they feel both distress and happiness. Under distress, gorillas may cry out as vocalizations though they don’t actually produce tears like humans do when they cry. However, gorillas produce tears just to lubricate their eyes. When gorillas are happy, they also express it through joyous vocalizations accompanied with actions like opening the upper lip and jumping onto each other especially among the juveniles.

5 Gorillas make new nests to sleep in every night

Gorillas don’t sleep in permanent nests but rather they make new nests to sleep in wherever the night finds them within their habitat. They use different vegetation including leaves, branches and parts of bushes to build these nests. The material is used to for several layers of bedding into a circular nest and the work takes about 5 minutes. Gorillas prefer to build their nests on the ground although some may decide to rest in an elevated position.

6 How does a gorilla family spend their day?

Basically, there are 3 activities that dominate the day of a gorilla family; traveling, foraging and resting. They also don’t travel a lot and on average they only travel for one mile per day but the combination of the 3 activities make up about 95% of the gorillas’ day. They spend the other part of their day in extra social activities like playing or grooming.