Enjoy tailor-made gorilla tours and safaris to  Uganda, Rwanda and Democratic Republic of Congo with Gorilla Trek Africa. World wide, gorilla trekking is reviewed as a magical encounter only done in the jungles of Bwindi impenetrable forest national park and the Virunga conservation area shared by, Mgahinga gorilla, Virunga and Volcanoes national park. GTA offers you combined gorilla safaris cutting across Uganda,Rwanda, and Congo. To make gorilla watching easy, Different gorilla families have been habituated each of which is visited by eight people every day. Travelers to see mountain gorillas are required to book and buy gorilla permits issued by Uganda wildlife authority (UWA) in Uganda, Rwanda Development Board (RDB) in Rwanda and the Institut Congolais pour la Conservation de la Nature (ICCN) in Congo. A 2 days Gorilla trekking tour  in Volcanoes National Park, the home of mountain gorillas in Rwanda. This is the best trip for those with less time in Rwanda, yet are interested in tracking the gorillas! Read More 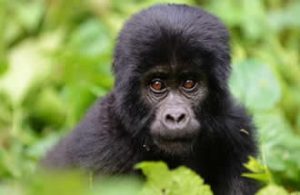 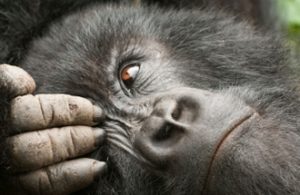 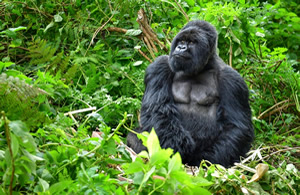 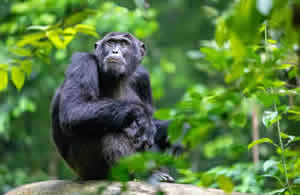 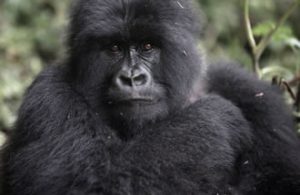 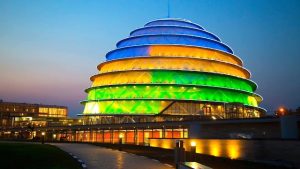 Where do gorilla tours take place in Rwanda? 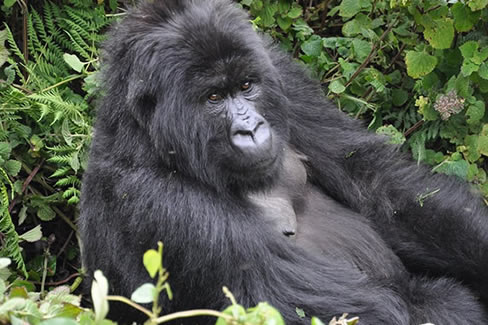 gorilla tours in Rwanda take place exclusively in Volcanoes national park in the northwest of the country. The park is part of the greater Virunga Mountains Conservation Area which is popularly known for protecting the endangered mountain gorillas of Rwanda, Congo and Uganda. There are about 360 g

orillas estimated to be in Volcanoes national park while conservationists have managed to habituate up to 10 groups of these elusive animals. The habituated gorilla groups are the ones that are visited by trekkers everyday in the park.

Each habituated gorilla group in the park is visited once pay day by a group not exceeding 8 trekkers. The visitors are permitted to spend one hour in the presence of gorillas during which they are free to take their pictures and videos as the animals go about their routines in the jungle. On average, a habituated gorilla family in Rwanda has got between 15-25 members. A gorilla family is headed by one alpha male, known as a silverback, several females with their young ones and a few juvenile gorillas. 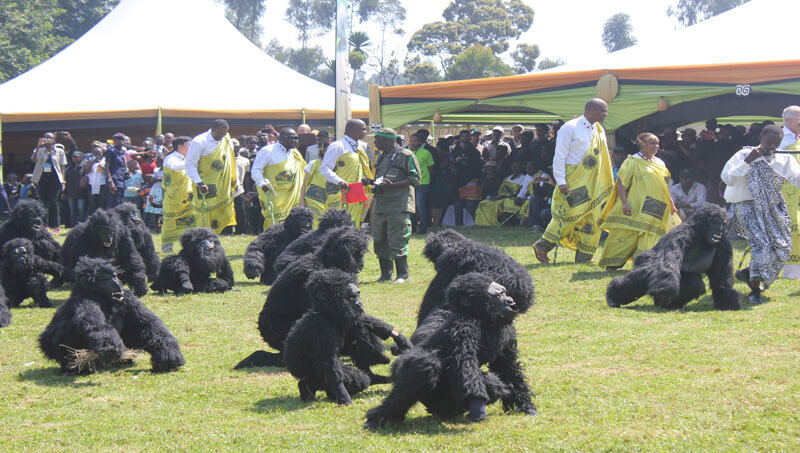 Habituated gorilla families in Rwanda which are visited by trekkers include Susa, Karisimbi, Sabyinyo, Amahoro, Umubano, Agashya, Kwitonda, Hirwa, Bwenge and Ugenda. Since 2005, Rwanda holds an annual gorilla naming ceremony, popularly know as ‘Kwita Izina.’ During the ceremony, all new born gorillas in the park are given names by the different invited guests invited from across the globe including celebrities, conservationists and diplomats. The purpose of naming these infant gorillas is to strengthen their protection by making their monitoring in the park easy. Since 2005 when the ceremony was initiated, over 350 gorillas have been named.

The primary requirement for trekking gorillas in Rwanda is the gorilla permit which is sold at $1,500 per person. Due to the limited availability of the permits, travellers are advised to book them in advance (at least 6 months before the tracking date). Bookings are majorly made online through a trusted local tour agent in Rwanda who goes ahead to arrange your safari including preparing your accommodation, transport and guiding services.

The dry season between June to September and December to February is the best season to trek gorillas in Rwanda. Mountain gorillas live in montane rainforests at a high altitude which can be very difficult to trek in wet seasons due to slippery conditions and heavy rains. Secondly, gorillas roam the forests freely during the dry season hence easy to find unlike in wet conditions when they tend to confine at one point.

Why Rwanda is the best for gorilla tours? 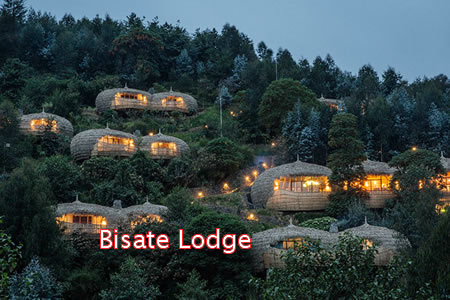 Rwanda is arguably the most ideal destination for gorilla trekking tours. Despite the relatively high price of her gorilla permit, Rwanda remains outstanding compared to Uganda and Congo in all the other aspects as far as gorilla trekking is concerned. Rwanda enjoys a comparative advantage in terms of the short driving distance (2-3 hours) from the airport to the park. This is far easier compared to Uganda where it takes more than 10 hours to reach the park while it is even worse in Congo where another flight is required before embarking on the road journey before accessing the park. Rwanda is also superior to her neighbours when it comes to developed infrastructure like good roads, and high quality accommodation facilities like hotels and lodges.

Bwindi Impenetrable National Park in the southwest is the major gorilla trekking destination in Uganda. The park protects half of the global population of mountain gorillas which is estimated to be around 1,064 animals. Mgahinga Gorilla National Park, part of the Virunga Mountains is another gorilla habitat in Uganda with one habituated gorilla group. 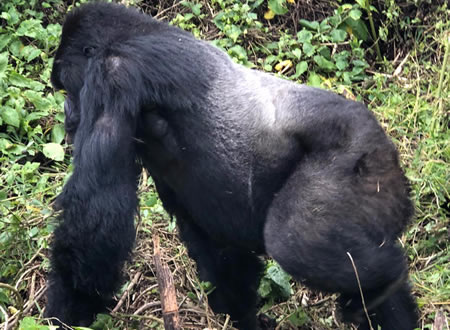 Bwindi Impenetrable National Park is Uganda’s major destination for gorilla trekking safaris. Bwindi is the world’s number one national park with the highest number of mountain gorillas. About 450 of the 1,064 mountain gorillas in the world live in Bwindi. The 20 habituated gorilla families in the park guarantee 100% chance for every visitor to see these endangered in their natural habitat. Some of the gorilla groups that have been successfully habituated in Bwindi include Mubare, Habinyanja, Rushegura, Katwe, Muyambi, Bitukura, Oruzogo, Kyaguliro, Mukiza and Nkuringo. Others include Bushaho, Nshongi, Bikingi, Mishaya, Kahungye, Bweza, Busingye, Kutu, Muchunguzi, and Rwigi.

The easiest route to trek mountain gorillas in Bwindi is via Kigali International Airport in Rwanda. It takes about 4-5 hours driving from Kigali to Bwindi which is far faster compared to over 10 hours of driving from Kampala to the park. This is simply because Bwindi Impenetrable national Park is geographically located nearer to Kigali than Kampala given that the park situated near the Uganda-Rwanda.

A Uganda gorilla permit for trekking mounatin gorillas in either Bwindi or Mgahinga is sold at $700 per person for foreign nonresidents. Foreign residents in the East Africa Community states pay $600 while East African citizens pay Uganda Shillings 250,000 for the permit. 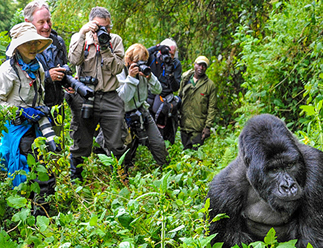 After the early morning briefing at the park headquarters, trekkers head into the wild in their respective groups searching for their allocated gorillas families to track. It takes about 2-6 hours on average to reach a gorilla family in Bwindi depending on where it spent the previous night. Once they reach the gorilla group, trekkers are permitted to spend one hour in their presence while observing the apes’ behaviour, taking their pictures and videos.

For gorilla trekking tours, Bwindi Impenetrable National Park is demarcated into four different sectors to facilitate the exercise. This is aimed at minimising human interference to the gorillas and reducing congestion in the park. The four gorilla sectors of Bwindi include Buhoma, Nkuringo, Ruhija and Rushaga. Travellers are allocated to trek gorillas in one of the sectors depending on the availability of permits in each. There are good lodges for accommodation around each sector and visitors will be guided to pick a lodge near their gorilla tracking sector.

Mgahinga gorilla national park in the southwest of Uganda offers an alternative gorilla trekking destination in Uganda to Bwindi Impenetrable national park. The park is part of the Virunga Mountains, contiguous with Rwanda’s Volcanoes National Park and the southern sector of DR Congo’s Virunga National Park. 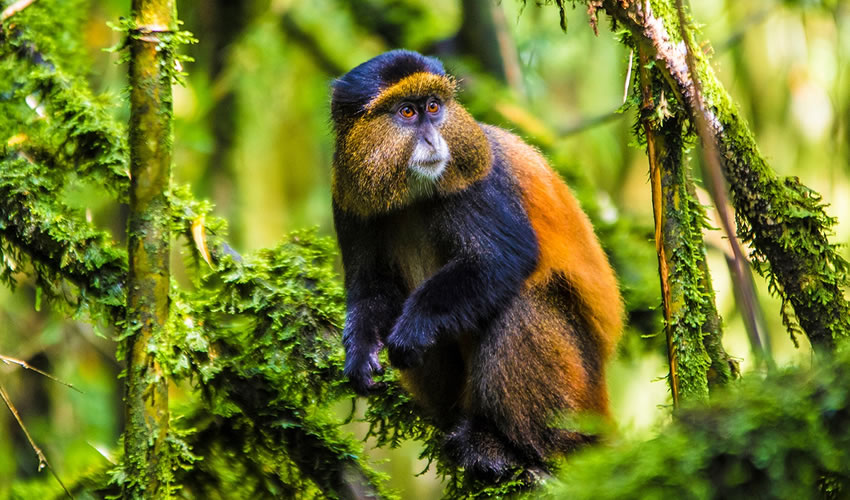 Gorilla trekking in Mgahinga is not so pronounced compared to Bwindi since the park has got one habituated gorilla group. This gorilla family known as Nyakagezi periodically crosses to Volcanoes national park in Rwanda and then returns after some time. Visitors can only be allocated to trek gorillas in Mgahinga after confirming that the family is within the park.

Mgahinga is popular for golden monkey tracking tours due the availability of these colourful primates in the park in large numbers. The park is therefore majorly visited by travellers who want to enjoy both gorilla trekking and golden monkey tracking experiences. It has offers a cheaper alternative to Volcanoes national park in Rwanda which also offers both experiences but at a higher cost.

For many years now, mountain gorilla trekking has been ranked as the best wildlife experience which attract the highest number of travellers from all parts of the world. The whole world has roughly 1006 mountain gorillas which live in only two destinations which are Bwindi Impenetrable Forest National Park in south western Uganda and the Virunga Conservation Area.
Before confirming any gorilla safari to Uganda, Rwanda or the Democratic Republic of Congo, travelers are advised to read and get detailed information about gorilla trekking, the cost, packing list, when to visit and who is eligible for trekking the gorillas. The commonly asked questions about gorilla trekking include:

The cost of gorilla tours in Rwanda, Uganda & Congo

The cost of gorilla trekking varies in Uganda, Rwanda and the Democratic Republic of Congo. In Uganda, gorilla permit prices depend on the nationality of the traveler. Gorilla trekking cost in Uganda is $700 for foreign no residents, $600 for foreign residents and UGX 250,000  for Ugandans and East African citizens. In Rwanda, each permit costs $1500 for all travelers regardless of the nationality while a single gorilla permit in Congo costs $450

Dry season in June, July, August, September, December, February and January is the best time for  visiting mountain gorillas in Africa. During this time,  gorilla parks receive minimal or no  rains  which ease movements  in search for the gorillas. The favourable weather in dry season encourage more tourists hence high demand for  gorilla permits. However, you can also trek mountain gorillas in  the low season in March, April, May, October & December. Interestingly, trekking gorillas in the wet season attract discounted offers  such as low room rates and transport offers

What to Pack for gorilla trekking

The allowed age for gorilla trekking in Uganda, Rwanda and Congo is 15 Years. Travelers are asked their passport details to confirm the age before arrival. children below 15 years are therefore not allowed to visit the endangered gorillas . However, if a child has few days to his 15th birth day, he/she may be allowed to trek gorillas if the parents sign a consent letter agreeing to  be responsible for anything that happens to a child

When to book a gorilla tour?

The recommended time to book a gorilla safari is roughly 6 months in advance. Early bookings ease planning and gorilla permit allocation. Gorilla Trek Africa is your reliable and trusted travel company to book and reserve a gorilla safari in Uganda, Rwanda and Congo

How to Book Gorilla Tours to Uganda, Rwanda & Congo

Do you have a query on any of the above tours? When you are interested in booking any of the above safaris, you can do it online by filling our Reservation Form or call and book with one of our knowledgeable vacations specialists. Our vacation specialists are available 7 days a week and are happy to answer any questions you may have.