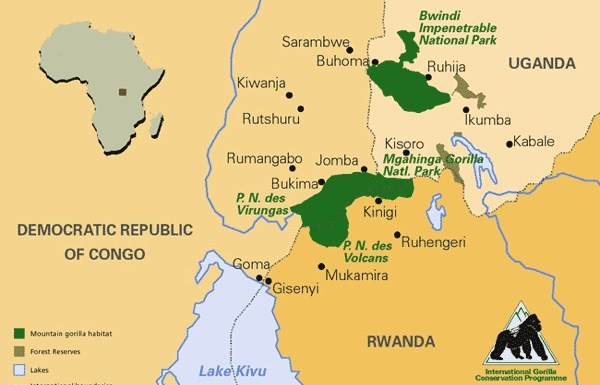 The increase in gorilla population is attributed to the positive efforts by conservationists, gorilla doctors, local people and respective governments who have worked vigorously to save these endangered species from total extinction. The international union for conservation of nature (IUCN) has confirmed gorilla increase promoting them from being “critically endangered species “ to “endangered species” hence great hope for sustainable gorilla tours in East and Central Africa. The red list of critically angered species as listed by the international union for conservation of nature include 96,951 species of animals and plants 26,840 of which are threatened to extinction. To ease trekking, mountain gorillas have been habituated into roughly 36 families, 17 in Uganda, 10 in Rwanda and 8 in democratic republic of Congo. Each day, thousands of travelers flock into the jungle forest to meet face to face and interact with these endangered species. Every day, each gorilla family is visited by a group of eight travelers who spend an hour in their company.

Threats to mountain gorillas
Despite their population increase, mountain gorillas still face various threats, which hinder their growth. The common threats include poaching where local people set traps to catch animals in the park and gorillas fall victims. Other threats to mountain gorilla tours include civil unrests associated with rebel groups who hide in gorilla parks making them insecure for tourists. Loss of habit to agriculture and land for settlement has continued to hinder the well being of mountain gorillas in their natural habits. Each day, local people that claim that the present gorilla lands belonged to them before the introduction of gorilla tourism encroach on these forests to expand their land for agriculture and settlement. Also, human-wildlife infectious diseases especially communicable diseases such as flue, which are deadly to infant gorillas with low immunity. The need to prevent the spread of diseases from people to gorillas is a reason why park rangers emphasize on the seven-meter distance between gorilla and trekkers. Besides mountain gorillas, these rain forests are habits to golden monkeys dwelling in Rwanda’s volcanoes national park and Mgahinga gorilla national park in Uganda.

What do travelers require to trek gorillas?

All travelers to see mountain gorillas are required to buy gorilla permits issued out by respective government bodies responsible for tourism and conservation. These tourism bodies are Rwanda Development Board (RDB) in Rwanda, Uganda Wildlife Authority (UWA) in Uganda and the Institute Congolese Pour la Conservation de la Nature (ICCN) in Virunga national park Congo. The costs of gorilla permits vary in each country and Rwanda but the trekking experience in each country is worth the penny. Since May 2017 Rwanda hiked her gorilla permit costs from $750 to $1500 paid by all nationals, Uganda sells gorilla permits at $600 for foreign non residents, and $500 for foreign residents paid all year round. Congo gorilla permits cost $450 but all gorilla safaris to Virunga national park are presently on halt to first deal with insecurity threats in the park associated with kidnaps and killing of travelers and park rangers.

Gorilla tours are a highlight for all wildlife safaris to East and Central Africa. Contact us for a tailor made gorilla safari to Uganda and Rwanda, meet face to face with mountain gorillas in their natural habitat and enjoy this once in a lifetime experience at a reasonable price.