Exactly a year back in June 2015, the Rwandan government in partnership with South Africa’s African Parks introduced a total of seven lions into Akagera national park. This was a move to revive tourism potential of Akagera wildlife park. The seven lions imported comprised of five females and two males.
Today the lion family in Akagera National Park has grown to a total of 10 with the birth of three cubs, importantly the first cubs to be born in the Rwanda in almost two decades. 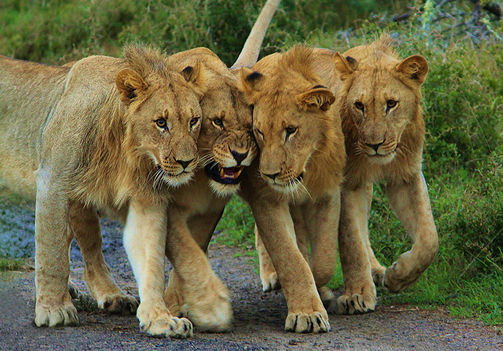 According to Akagera national park management team, African Parks, the 11 year old Shema is the mother to all three curbs which are now approximately 3 weeks old. The cubs have been spot ten with their mother around the park. Shema is one of the female lions introduced to the park almost a year back with Ntwari, the father, a five year old, also park of the two male lions introduce to the last last year.

The birth of 3 cubs is great news for Rwanda in her efforts to restore the country’s lion population, which was wiped out following the country’s 1994 Genocide against the Tusti. During this unstable period, the park was not managed and protected and hence the lions were poisoned by herders who killed and wiped out Rwanda's last lion population.

The Africa Park management team also noted that more lion cubs are being expected as Ntwari the dominant male lion has been seen mating with other lionesses, hence the number is still growing. Lions breed quickly hence numbers are going to grow quite fast.

In conclusion, lions have a major significance in Rwanda's history as they directly link to the horrific genocide of 1994 were massif of innocent people lost their lives. A growth and recovery of lion population in Akagera national park portrays recovery of Rwanda from her past breakdowns. Contact Gorilla Trek Africa for guided Rwanda game safaris to Akagera National Park