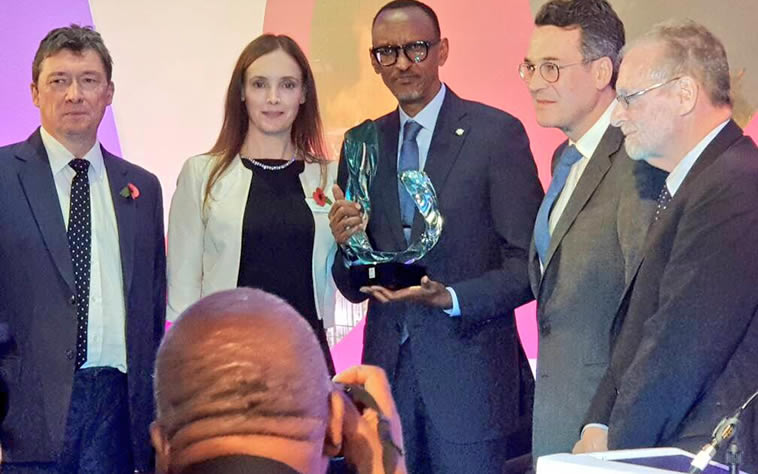 While analyzing Rwanda’s success story, good and visionary leadership of Paul Kagame the president is surely a key factor for the country’s transformation and tourism success. Obviously, people who have been to Rwanda give different reviews about the country among which are the memorable gorilla safaris, beautiful landscapes, Virunga volcanoes, ease of accessibility, hospitable people, clean city along with extensive marketing. However, tourism success in Rwanda is attributed to good and visionary leadership since 2000 recovering from the tears of a horrific genocide. For good leadership therefore, HE Paul Kagame was on 6th November honored with the world tourism award for his visionary leadership skills for the year 2017. On the same day, world tourism award celebrated its 20th anniversary as well as commercially opening the world travel market in London at the excel center. Rwanda New York times, Reed Travel Exhibitions and Corinthia hotels were the key sponsors of the event. Other parties who were helpful in the event include Peter Greenberg the CBS news editor along with world-renowned travel experts who together hosted the event.

Having a look at President Paul Kagama’s achievements, the visionary leader has transformed Rwanda through reconciliation policies and wildlife conservation all aimed at promoting sustainable tourism in the country. Similarly, Kagame has supported economic development in Rwanda, which has attracted many investments such as in hotels and lodges hence a remarkable turn around for the Rwanda’s tourism success. Similarly, kagame’s presidency has turned Rwanda into an investment destination. Numerous investment initiatives have been established in all parts of Rwanda to ensure a conducive business environment. According to the 2017 WEF global competitiveness, Rwanda is presently considered a 2nd competitive destination for business in Africa. The conducive environment has encouraged more investors to support tourism sector in Rwanda.

Still with the leadership of Paul Kagame, Rwanda has successfully promoted wildlife conservation especially for the endangered mountain gorillas in Volcanoes national park.Rwanda is now a home to over 305 mountain gorillas, which is roughly quarter of the world’s remaining gorillas and the highest in the Virunga conservation area. Besides gorillas, the recent reintroduction of lions and rhinos in Akagera national park has made Rwanda a home to the big five. The construction of a fence around Akagera national park has also reduced human wildlife conflicts hence tourism development. More still, there has been reconciliation between the park management and local people, which have attracted local people’s support for tourism hence, reduced poaching and increase in wildlife population. The threats to wildlife have been reduced by 2017 in that I snare has so far been collected from volcanoes national park compared to 2000 snares that were collected in 2013. In the same way, there has been a reduction in the number of poachers unlike in 2013 where tourism police in Rwanda arrested over 200 poachers. The peace and security in Rwanda’s national parks is attributed to Paul Kagame’s visionary leadership.

Tourism is Rwanda’s leading foreign exchange earner contributing over 50% of the country’s gross domestic Product. The revenue earned from tourism has increased over years for example from US$200 million in 2010 to US$404 in 2016, which is roughly 10% increment. Concerning the number of tourist arrivals, Rwanda receives the highest population of travelers from all parts of the world. In 2016, Rwanda received over 1.3 million travelers an increase by 12% against the backdrop of the United Nations world tourism organization arrivals in global emerging markets benchmarked at 3.3%.

The Kigali convention center together with Radisson Blu hotel makes Rwanda a best destination for international conference and meetings. Additionally, Rwanda has established over 1,600 international brands, which offer four and five star services to travelers of all kind. The leading hotels in Rwanda include Radisson Blu Hotel, one and only Nyungwe House, Bisate lodge by the wilderness safaris, Kigali Marriot and the Ubumwe grand also called the double tree under the management of Hilton provide excellent services to travelers. Interestingly, hotels/ lodges have together created over 90,000 jobs for local people direct and indirectly hence improved standards of living and Rwanda’s development.

Rwanda development board with visionary leadership of Paul Kagame has put several strategies to increase tourism destinations in the country.These include the newly garzetted Gishwati Mukura national park, which has brought a total of national parks in Rwanda to four the otehr ones being volcanoes national park known for mountain gorillas, Nyungwe forest national park for chimpanzees and canopy walk and then Akagera national park a home for the big five game.9% of Rwanda’s total land area is now covered by national parks. Also, the doubling of a gorilla permit from 750usd to 1500usd with immediate effect called for an increase of community benefit from 5% to 10% to improve the wellbeing of local people. This has improved people’s standards of living as well as generated support from local people hence conservation. Local people have been employed as local guides, porters as well as chefs, waiters, waitresses, and housekeepers in Rwanda hotels/ lodges. The money earned is used to support families hence improved standards of living.

Conclusively therefore, Paul kagame is a leader with vision.The exceptional leadership of Rwanda’s president has transformed the country into the leading tourism destination in Africa.