The Mgahinga Gorilla National Park (MGNP) is located in Kisoro district in far South Western Uganda. It was gazzeted as a National Park in 1991 by the Ugandan government through the Uganda Wildlife Authority to preserve wildlife in the park especially the endangered Mountain gorilla, this has made gorilla trekking activities in the Park to be on the rise since then. Gorilla Trek Africa guides you to explore the hidden gem in Mgahinga Gorilla National park MGNP is made up of three Virunga Volcanoes; Mount Muhabura, Mount Gahinga, and Mount Sabyinyo. These dormant volcanoes are part of the 8 Volcanoes that make up the Virunga Mountains, the rest being found in Democratic Republic of Congo (DRC) and Rwanda. Mgahinga and Muhabura are at the Uganda/Rwanda border where as Sabyinyo is at the tripoint on the Uganda/Rwanda/Democratic Republic of Congo (DRC) borders. All together these Parks have made the region to be well known worldwide because of gorilla tourism related activities like gorilla trekking and gorilla tracking. These parks cover 434 square kilometers (168 sq. mi) and Since they are inter-connected, all the three governments agreed to create a combined conservation area for mountain gorilla habitat known as The Virunga Conservation Area (VCA). The MGNP covers about 8 percent of the total VCA.

In terms of vegetation and climate, the park has tropical moist broadleaf forests of the Afromontane Albertine Rift montane forests ecoregion. It experiences two wet rainy seasons: February to May and September to December with the average amount of monthly rainfall varying from 250 millimeters (9.8 in) in October to 10 millimeters (0.39 in) in July. This information would be very useful for those who would like to visit Uganda for gorilla tours and gorilla tracking in the park. Gorilla safaris in the park are more effective and interesting in drier months of December to January and June to August.

Mgahinga Gorilla National Park is the second habitat of the mountain gorillas in Uganda after Bwindi Impenetrable Forest National Park though only one habituated gorilla family, the Nyakagezi group can be found in the park compared to the 12 gorilla families at Bwindi Impenetrable Forest National Park. Away from mountain gorillas, the park has other tourist attractions such as the, golden monkey trekking, Sabyinyo Volcano hike and Batwa trail although gorilla tracking is the main tourist activity in the park. The Batwa is an indigenous tribal group found near the park who always entertain tourists with their cultural dance, games and stories. They are also associated with the Batwa of Rwanda and the Pygmies of Democratic Republic of Congo. The addition of these other tourist activities to support gorilla tracking has made gorilla tourism at Mgahinga to develop steadily over the past five years.

The park organizes gorilla trekking safaris on a daily basis starting at 8:00am each morning. The trekking starts from Ntebeko entrance gate and lasts for 2-4 hours. The maximum time allowed to spend with the gorillas is one hour therefore visitors are advised to plan for their time very well. Gorilla tracking at the Park will enable you interact with the Nyakagezi gorilla family, the only gorilla group found in this park.

These were the indigenous people of the dense Mgahinga forests and it was the source of their food in honey, meat and medicine. They were evicted after the establishment of the National Park. However, they were retained in the park as tour guides on the Batwa trail where they introduce visitors to the magic of their ancient home and their cultural heritage. They do this by demonstrating to tourists their hunting skills, making bamboo cups, pointing out medicinal plants and gathering honey. Visitors are also taken to the sacred Garama cave a former refuge for Batwa where they perform cultural ceremonies to commemorate that ancient period. Part of the funds collected from the Batwa trails is paid to the guides and musicians and the rest is used to support the Batwa children for education to improve their standards of living. 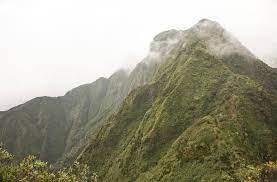 There are 3 summits available for mountain climbing in Mgahinga Gorilla National Park that is; Mount Muhavura which is the highest with its peak at 4,127m. This trip takes around 8 hours and there are 12km to cover. Hikers at the summit can see a wide range of beautiful sceneries including the Virunga Volcanoes, Lake Edward, Bwindi Impenetrable Forest and the peaks of the Rwenzori mountains.
Mount Sabyinyo is the second summit to hike and it has a height of 3,669m, it has a steep ridge of 14km that can be travelled for about 8 hours.
Lastly, Mount Mgahinga is another summit with 3,474m, climbers go through the bamboo forest where some golden monkeys can be spotted. it takes about 6 hours to and from the summit that is filled with a swamp crater and giant lobelia. 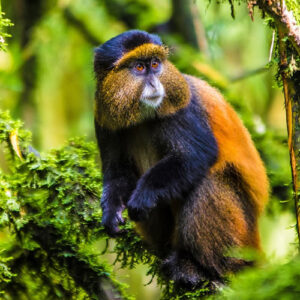 Golden monkey trekking is another interesting activity done in Mgahinga Gorilla National park. The Park is the only place where endangered golden monkeys are trekked in the whole of Uganda. Uganda Wildlife Authority has habituated these primates into communities to make trekking easy. Enjoy the lively and playful social behaviours of golden monkeys which make them distinct creatures worth visiting.

Hikes and natural walks are done to the summits of the 3 volcanoes in the park. Most of the hikes go through the forests which presents an opportunity for birding, and golden monkey trekking in the bamboo forests at the slopes. Hikers can also see calderas on top of the Gisozi hill plus the view of Kisoro and Bunagana towns as well as Lake Mutanda.

Accommodation /Where to Stay in Mgahinga Gorilla National Park

Accommodation in Mgahinga is available at Amajambere Iwacu Community Camp for budget tourists. Mount Mgahinga Lodge is also available for mid-range budget tourists.
It is also important to know that a maximum of 8 people are allowed to visit the gorillas in a day.

How to Get to Mgahinga Gorilla National park

It is located within the Bufumbira county in Kisoro district, about 15 kilometers (9.3 mi), by road, South of the town of Kisoro and approximately 55 kilometers (34 mi) by road West of Kabale which is the largest town in the sub-region.
From the capital Kampala (510km away), the most commonly used route passes through Kabale and Kisoro. The journey from Kampala to Kabale covers 434km for about 8 hours on a good tarmac road. You will then take a further 76km to Kisoro on a mountainous tarmac road. The main entrance to Mgahinga Gorilla National Park is at Ntebeko 14km from Kisoro.
Tourists can also access the park from Bwindi Impenetrable Forest National Park. From the main trailhead of Bwindi at Buhoma, Mgahinga is almost four hours’ drive away.
Mgahinga can also be reached by air from Entebbe International Airport to Kisoro airfield. There are daily flights to this destination.

Generally, visiting Mgahinga Gorilla National Park is worthy to be under your consideration because reaching the park will quench your curiosity for mountain gorilla tracking, golden monkey trekking and an unforgettable encounter with the Batwa trail. You shouldn’t also miss out on Sabyinyo mountain hike. All these spectacular experiences will leave you with great memories about your Uganda safari.