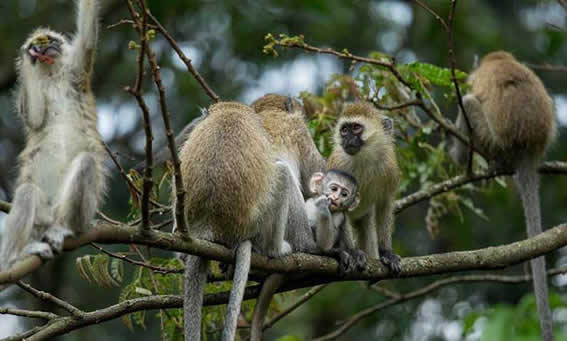 Rwanda to Open Fourth National Park For Tourism
Primate lovers are to once again explore a fresh tracking area for more fun as Rwanda adds another tourism destination on their itinerary. Gishwati-Mukura National Park is the latest national park in Rwanda and in the region at large to be opened for tourism. Next year Rwanda will be opening their fourth national park to visitors expanding her tourism menu complementing gorilla trekking in Volcanoes Np, chimpanzee tours in Nyungwe & game viewing in Akagera NP. The Rwanda Development Board (RDB) says that plans for the official launch are in advanced stages. The opening of Gishwati-Mukura as another national park comes as part of the government broader conservational plan to increase the total forest cover to occupy 30 percent of the country’s surface area. Gishwati-Mukura national park is found in the highest ridges of the Congo-Nile Divide along the Albertine Rift in the Northwest of Rwanda. The park is not only important for biodiversity conservation but also in preserving and improving ecosystem services as well as providing an economic engine that supports the surrounding communities and plays an integral part in its protection.

The park was almost depleted following occupation through resettlements after the 1994 genocide against the Tutsi. The insurgency resulted in major environmental problems like illegal mining in the mineral-rich forest, land degradation as a result of livestock farming and other farming activities. These further resulted in subsequent soil erosion, landslides, and floods that caused more threats to the natural habitat.

The tourism authority in Rwanda says that before the park begins to welcome visitors in 2019, they are still working on some key areas that need to be put in place. Some of the areas the board is still working on including the tourism master plan, putting the infrastructure in place, hire and train staff, train rangers and guides and promoting the park to different tour operators.

A number of conservation specialist have applauded the government effort to upgrade Gishwati-Mukura as a national park saying that it is a proof of commitment to preserving the natural heritage of Rwanda. The park is truly a jewel, which not only offers travelers amazing chimps and golden monkey tracking experiences but also has a strong link with the people living in the surrounding communities.

The transformation of the formerly reserved area into a national park came into effect following the adoption of the law in February 2016 to transform the Gishwati-Mukura rainforest into a single national park hence making it the fourth national park in the country. Since then, environmentalists started making efforts to devise means to restore the forests through; conservation of biodiversity, increasing forest cover, promotion of climate change adaptation efforts, combating land degradation among others.

According to officials, the park is being lined up to be recognized by UNESCO World heritage as a biosphere reserve. In addition, there is much economic potential in the park as confirmed by reports from the Albertine Rift Conservation Society (ARCOS), a regional organization working for biodiversity conservation estimated that the forest resources and ecosystem services in Mukura forest are worth more than $1 million per year while the ecosystem services provided by Gishwati forest were valued at $3 million per year.

When implemented successfully the project will restore 653 hectares of forest in Gishwati-Mukura national park, 500 hectares of buffer zone plantations, 700 hectares of plant natural forests, 1406 hectares for sustainable land management while over 18 new tree species will be introduced.

Gishwati-Mukura has got some of the amazing primates like chimpanzees and golden monkeys. Though still few in number, these wonderful primates can be seen once you enter their habitat and the experience will be as good as in any other primates rich destination.

Gishwati-Mukura national park has also got bird-lovers covered as it hosts some of the most sought after Albertine Rift endemic species. These include the beautiful Rwenzori Turaco, Mount yellow warblers, regal sunbird, grey-crowned cranes, weaverbirds, strange weaver, woodhoopoes, red-throated alethe, martial eagle and any others.

While on this interesting encounter, tourists have a chance to explore the park’s natural wonders that have got monkey varieties like blue monkey, black and white colobus, golden monkeys, L’Hoest’s monkey. Over 60 tree species that include mahogany, orchids, macaranga kilimand, ferns, bamboo, blue lichens. There are also several butterfly and mammal species. Other species in the park include amphibians and reptiles. Finally, the nature walk will lead you to the beautiful Kazeneza waterfalls that are situated in the middle of the forest.