Rwanda is already reaping big from her partnership with Arsenal football club. The partnership has seen David Luiz the defender for the arsenal football club visit Rwanda for a 2 days Rwanda trip. In his 2 days Rwanda tour, David Luiz will trek gorillas in Volcanoes National park and also visit the Kigali genocide memorial center on his city tour through the clean, and beautiful Kigali city. David’s visit to Rwanda follows a previous visit of Arsenal legends (Alex Scott, Tony Adams, and Lauren) that visited Rwanda in September 2019 to attend the Kwita Izina ceremony for naming baby gorillas in Volcanoes National park. David came along with his fiancé and mother to enjoy the beauty of Rwanda, the land of a thousand hills. David’s Rwanda tour is part of the “Visit Rwanda” tourism partnership, which was signed between Rwanda and the arsenal football club in May 2018. The 3 years partnership is meant to see the “Visit Rwanda “slogan featured on the sleeves of the arsenal football club, encouraging more football fans to travel to Rwanda.

Still, on his stay in Rwanda, Luiz will meet and interact with local young players under the arsenal supported coaching programme to foster their talents and share the experience. David will share his experience with young players boosting their knowledge in football. David is so much excited to visit Rwanda and experience all the wonderful things he has overtime heard about the breathtaking beauty of Rwanda, the rolling thousand hills and lovely people.

Who is David Luiz 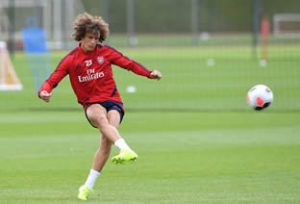 The now arsenal defender is a former player of Chelsea and Paris St Germain. The 23 years old player started his career with Brazilian side Vitoria and then moved to Europe where he joined the Portuguese giants Benfica. In his career, David Luiz has scored 33 goals in 475 club games. He recently won a 1-0 win against Bournemouth in the premier league. While he was still in Brazil national team, David Luiz scored 57 caps for the team. On social media, David is the third most followed the player in the premier league having more than 52 million followers on Facebook, instagram, and Twitter. David is a new member of arsenal who joined the football club in the summer of 2019.

In his tweet, David said, “ I have heard wonderful things about the breathtaking beauty of Rwanda and its people, and I can’t wait to experience the country and all it has to offer. Football has the amazing power to bring communities together and drive social change and the Arsenal shirt has a unique ability to reach fans all over the world. I am very proud to represent Arsenal to help tell a global audience of Rwanda’s modernization into a luxury tourism destination, its amazing culture and its enthusiasm for football development”.

It’s undeniable that the “Visit Rwanda” strategy has surely worked for Rwanda. In terms of promoting tourism. The inaugural sleeve sponsor has made Rwanda a must see travel destination for football fans from all over the world. The partnership has encouraged 51% football fans especially Arsenal fans consider Rwanda as their favorite travel destination. In 2018, Rwanda received 1.7 million travelers from all over the world registering an 8% increase compared to 2017. The 3 years partnership was signed in May 2018 costing Rwanda huge sums of money worth £30 million. Despite the accusations to RDB for spending a lot of money, the partnership has started earning big. Within a year, the Rwanda Development Board has earned the £30 million investment from the partnership. More so, the youtube channel for “Visit Rwanda” has won a 100% increase in subscribers while the brands’ twitter has achieved a boost of 71% and Instagram 77% increase. This is a great achievement that will see Rwanda thrive higher and higher in the remaining 2 years of Rwanda Arsenal partnership.

Visit Rwanda and see for yourself! The rolling hills, endangered mountain gorillas, historical spots, mountains rivers, lakes and hospitable people plus the beautiful Kigali city will make you believe that Rwanda is indeed a must-visit destination in Africa.