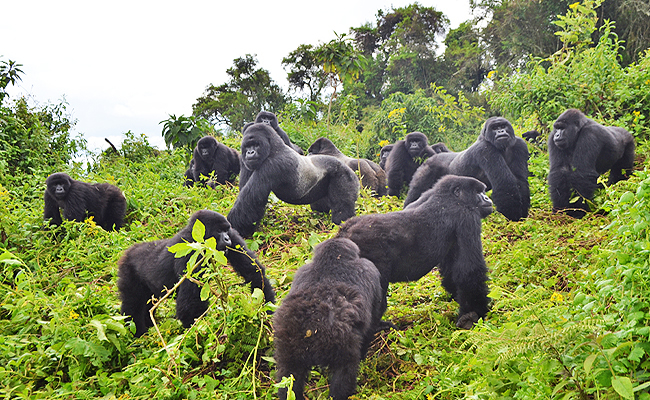 Mountain gorillas are one of the endangered primates regarded to be facing the risk of extinction over the years. Fortunately, today figures show that the population of mountain gorillas has been growing steadily, from around 250 animals that were estimated to be in the wild in the 1970s to about 1,000 today.
Today mountain gorillas are one of the most protected and conserved animals in the wild and it requires one to organize a gorilla safari in order to see them. Due to conservation purposes, authorities allow a group of 8 trekkers to visit a single gorilla family per day and spend an hour with it. This policy is the same in all gorilla trekking destinations.

What are mountain gorillas?

Mountain gorillas are subspecies of the Eastern gorilla. They are large and strong apes that live in Africa’s high altitude volcanic slopes (in Virunga mountains of DRC, Rwanda, and Uganda). Mountain gorillas together with chimpanzees are the closest wild relatives of human beings sharing 98% of the human DNA.

Why are mountain gorillas endangered?

Although mountain gorillas have few natural predators, the continued threat from human activity like poaching, habitat loss and civil wars, these great apes have become one of the most endangered types of primates. However, due to conservation efforts, the population of mountain gorillas has steadily grown with estimates showing that there are currently about 1,000 mountain gorillas in the wild compared to about 250 that lived in the wild in the 1970s.

Where do mountain gorillas live?

What are some of the common characteristics of mountain gorillas?

Mountain gorillas are generally shy and strong animals. They are gentle and harmless to human being though they can charge and become aggressive when provoked. The male, who is a group leader is always the first to charge and respond to the threat while the females will fight to death to protect their babies.

Mountain gorillas live in groups of between 15 to 35 individuals. Some groups have been habituated for tourists and they can visit and trek them through an organized gorilla safari. The male mountain gorillas are called silverbacks and they lead their families and father the young ones. The name silverback comes as a result of male gorillas possessing a silver stripe that grows on their backs as they mature. A typical gorilla family/group is made up of a mature silverback as the leader, several females and many infants and juvenile gorillas.

The Silverbacks are responsible for providing security to their respective groups, they also decide the activities of the group and maintain the order. In addition, they also schedule feeding trips, travel and resting time. All the young ones in the group are fathered by the silverback.

Female gorillas and the gestation period

The female mountain gorillas usually begin giving birth at the age of 10. Their gestation period is eight and a half months (8.5) and they bear between two and six babies in a lifetime. A mother gorilla can carry one or two babies at a time.

A male gorilla that is fully grown can weigh up to 180 kg while females weigh half that with about 90 kg. Newborn baby gorillas weigh about 1.8 kg at birth. Baby gorillas at birth are as weak and uncoordinated as human babies. During the first four months, babies learn how to get around by clinging to their mother’s backs. The young gorillas get fully weaned from their mother’s milk at the age of three and half years after which they start feeding on the same diet as the mature ones which includes shoots, plants, leaves, and roots.

Another distinguishing feature between male mountain gorillas and the female ones is the crest of fur on the head of the males. The thick black hair that covers the body of a mountain gorillas helps to keep them warm in the high altitude cold temperatures.

Mountain gorillas are listed as endangered by the International Union for Conservation of Nature Red List (IUCN) due to the threats they face. In addition to the human threats, they have also been killed and captured by poachers in their habitat. Poachers sell the body parts of mountain gorillas to collectors while baby gorillas are illegally sold as pets, private zoo animals and research subjects.

What makes mountain gorillas so important?

Mountain gorillas just like other animals are very important components of the environment. Gorillas are large-scale grazers that help in the balancing of the ecosystem by eating up lots of vegetation. Without this balance, other wildlife in the area could be affected negatively including people who depend on natural resources for food, water, and oxygen.

Furthermore, mountain gorillas are very instrumental components in ecotourism, gorilla safaris are arranged as carefully guide trips to see gorillas in the wild. Communities living around gorillas have also benefited tremendously from gorilla safaris by earning a living through offering complementary tour services to travelers like cultural performances.
Estimates show that one gorilla indirectly generates about $3.3 million tourist income over its lifetime.

Click here to book a gorilla safari or make an inquiry.