Volcanoes National Park is located in Musanze district northern province of Rwanda about 104km (71 miles2) from Kigali capital city. The protected area covers about 168 sq.km and contains three dormant volcanoes including Mt. Karisimbi the highest at 4507 m, Mt. Bisoke 3711 m and Mt. Muhabura 4127 m. The three are part of the 8 volcanic mountains that form the adjoining Greater Virunga Massif straddling the borders between Rwanda, Uganda and Democratic Republic of Congo. The park is contiguous with Mgahinga Gorilla and Virunga National Parks.

First gazetted in 1925 along with Virunga National Park in Congo by the Belgians, Volcanoes is one of the oldest protected areas in Africa. The initial efforts to protect wildlife were limited and sadly large-scale encroachment occurred including conversion of 700 hectares of natural forests for pyrethrum growing in 1958. As a result, habitat loss and poaching became major threats to mountain gorilla treks in Rwanda. Luckily, Dian Fossey an American primatologist arrived on a mission to study mountain gorillas in Volcanoes National Park and initiated active conservation activities including anti-poaching patrols, monitoring and research. ‘Digit’ the first gorilla to accept her presence was killed by poachers and Fossey, also, founded the “Digit Fund” in 1978 (known today as the Dian Fossey Gorilla Fund International) to finance anti-poaching patrols. In her position to directly confront poachers and defend gorillas, she was brutally murdered in 1985 and those intending to trace her footsteps can hike to Dian Fossey Grave Yard and Karisoke Research Center in the forest at 3000 meters between Bisoke and Karisimbi volcanoes. Having warned that gorillas would be extinct by the turn of the century, the heartbreaking news of her death around the world helped to inspire the intervention of the international community including formation of the International Gorilla Conservation Program (ICGP) in 1991 to save gorillas not only in Rwanda but also the entire Virunga area. The works of Dian Fossey are memorialized in a movie titled “Gorillas in the Mist” a must watch for those intending to go for gorilla tours in Rwanda. The movie contains some of her magical moments caring and playing with baby gorillas in Volcanoes National Park.

Activities to do in Volcanoes National Park

Gorilla trekking is the main activity in the park but if you plan to spend more days there are a number of things to do within the park including golden monkey tracking, volcano hiking, nature walks, bird watching and visiting Dian Fossey Grave site. Activities outside the park offer a chance to explore local culture and support rural tourism including Gorilla Guardian’s Village tour, Buhanga eco-park, Musanze caves, twin lakes hike and boat ride. 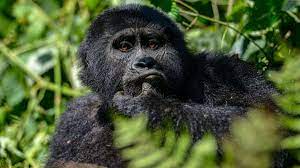 When you book a gorilla safari permit, you are guaranteed to see gorillas in their natural habitat if unfortunate circumstances don’t happen like getting sick on the trekking day. In addition to the fact that a team of Rwandan Development Board (RDB) trackers and rangers use modern technology including GPS to locate gorilla families ahead of time based on daily data about their movement and feeding patterns. Trekking requires physical fitness to withstand the nature of terrain. The vegetation in Volcanoes National Park is relatively made up of open bamboo with little dense undergrowth and can be less challenging. Preparation for the trek is still key especially the seniors (ageing) are advised to take porters available for hire at Kinigi visitor center, get a walking stick and wear sturdy hiking boots. There are 12 Rwanda gorilla families of which only 10 are open for gorilla trekking including Sabinyo, Karisimbi, Agashya, Amahoro, Kwitonda, Susa, Hirwa, Titus, Umubano and Bwenge while the other two are for research purposes. Each gorilla group is tracked by a maximum number of 8 visitors for 1 hour per day. Briefing on gorilla rules including wearing facemask and keeping a 7-meter distance and allocation of the families is determined by rangers based on age and hiking capacity of visitors. The Rwanda gorilla permit cost is $1500 per person and a total of 96 permits are available per day for booking through Rwanda Development Board (RDB) or tour operator. Despite being expensive, gorilla trekking in Rwanda is not only a once in a lifetime wildlife experience and equally important 10% of the total gorilla tourism revenue is shared with the local communities living around Volcanoes National Park through building of schools, clean water, health facilities and sustainable agriculture which benefits people and motivates them to conserves gorillas and their habitat. Given the high cost of the permit, Rwanda offers luxury gorilla trekking safaris with a selection of high-end Eco-lodges including Bisate Wilderness, Singita-Kwitonda, Gorilla’s Nest and Governor’s Camp Sabinyo Silverback among other medium facilities such as Gorilla Villa, Da Vinci Gorilla, Mountain Gorilla View, Virunga Lodges etc. 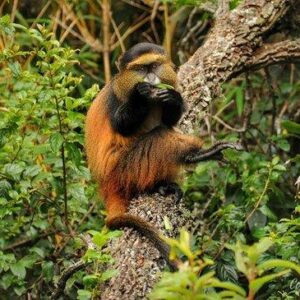 Golden monkeys are endangered primates endemic to Virunga Mountains and Albertine Rift Valley. Their population is estimated between 2500 to 3500 individuals and those habituated for tourism can be tracked in Volcanoes and Mgahinga Gorilla National Parks. The golden monkey tracking permit cost is $100 per person in Rwanda Volcanoes National Park where two troops of golden monkeys are habituated for tourism. Those who intend to see golden monkeys, the permit is available for booking through tour operator, online or on arrival at Rwanda Development Board offices in Kigali city and Kinigi the park visitor center. Unlike gorilla trekking, the golden monkeys live in the bamboo zone which is their key food that grows at 3800 meters above sea level and hiking is straightforward from Kinigi to the upper volcano slopes where visitors begin the uneven search for the primates. Tracking can last 2-3 hours depending on their location and visitors spend 1 hour with golden monkeys. They roam in large troops consisting of 30 to 80 individuals notable for their beautiful color with golden-orange patch on the upper flanks, back, tail and crown. Their average lifespan is 19 years in the wild almost similar to Panda in China. Golden monkeys, also, are fastest primates and have been known for their swift and playful character.

Hiking in Rwanda offers a chance to climb the Virunga Mountains in Volcanoes National Park including Mt. Bisoke (3711 m), Mt. Muhabura (4127 m) and Mt. Karisimbi (4507 m). Climbing Bisoke and Muhabura volcanoes is completed in a one day hike. For those who have time, hiking mount Karisimbi takes 2 days including camping up in the heights at 3660 meters. All treks are guided and begin at Kinigi visitor center where gears and porters are available for hire.

Hiking Karisimbi Volcano
Mount Karisimbi is a stratovolcano standing an elevation of 4507 meters above sea level. Climbing Karisimbi takes you to the tallest peak in the Virunga massif and 11th in Africa giving you the bird’s eye view of the area. If you intend to hike Karisimbi, prepare for a 2-day backpacking trip with camping on the volcano slopes at 3660 meters. Hikers can bring own camping gears including tent, sleeping bag, though they are available for hire at Kinigi visitor center where the hike begins at 7:30 am in the morning. The hike to the camping spot is 6 to 8 hours and offers a chance to explore different types of vegetation including grassland, tropical forests, bamboo, heath and moorland.

Climbing Mount Bisoke
Bisoke is a dormant volcano stands at 3711 meters above sea level and has a crater lake on its summit. Lake Ngenzi crater and a small swamp is thought to have been formed by volcanic eruptions that occurred on Bisoke in 1891 and 1957. The mount Bisoke day hike cost is $75 per person and takes 4 to 6 hours to walk the trail going up to the top and 2 hours downwards. The trailhead is 40 minute walk from Kinigi visitor center. If you only have one day to spare, this hike is an alternative to the 2-day long Karisimbi hike. Given that the volcano shares border with Democratic Republic of Congo (DRC), along the trail, you get to spot birds and get a view of Nyiragongo and Nyamuragira volcanoes Virunga National Park. Bisoke, also, is home to Karisoke Research Center established by Dian Fossey in 1967. 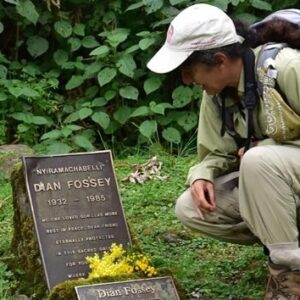 Dian Fossey was killed in December 1985 while studying mountain gorillas for over 18 years in Rwanda. Fossey may be long gone but not forgotten. She established Karisoke Research Center in 1967 located between Mt. Bisoke and Karisimbi in Volcanoes National Park where she was buried. Since her death, her foundation – the Dian Fossey Gorilla Fund International (DFGFI) has done a lot of work to save gorillas and helping communities in Rwanda, Uganda and DR Congo. Gorilla tourism is a major source of foreign exchange contributing 14% of the total tourism revenue $498 as indicated by Rwanda Development Board (RDB). The Fossey hike offers insight into the history of gorilla conservation and how the problem of poaching and habitat loss is almost non-existence due to funding. The cost of the permit for Dian Fossey hike is $75 available for booking at the tourism office in Kigali city and Kinigi the park visitor center. Expect to hike for 2-hours from the trailhead to graveyard where Fossey is buried along with her favorite gorilla ‘digit’ and 20 others that were killed by poachers or snares traps. The old ruins of cabin and research site are seen. Along the trail, expect to spot a variety of birds and bushbucks. Visitors may also spot or hear the sounds of forest elephants and gorillas while hiking. 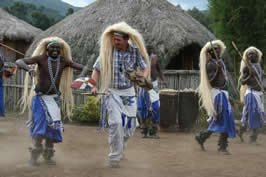 The Community Based Organization (CBO) known also as ‘Gorilla Guardian’s Village’ was established in 2004 with the aim to improve their lives of ex-poachers in the local community near Volcanoes National Park. The CBO does it work through livelihood sustainable agriculture projects including goat rearing, bee keeping and cultural tourism. Visiting Iby’iwacu cultural village offers a chance to take part in several cultural experiences including traditional dance performances and farming practices such as grinding millet and sorghum on stones, banana beer activity, preparing a local dish among others such as bow and arrow shooting. The locals are able to earn income to support their families thus no longer participate in illegal activities such as poaching and encroachment the main threats to the survival of gorillas and golden monkeys.
Gorilla Trek Africa is your trusted travel operator for Rwanda gorilla tours and other experiences in Volcanoes National Park. We tailor make your desired itinerary to suit your budget and time.