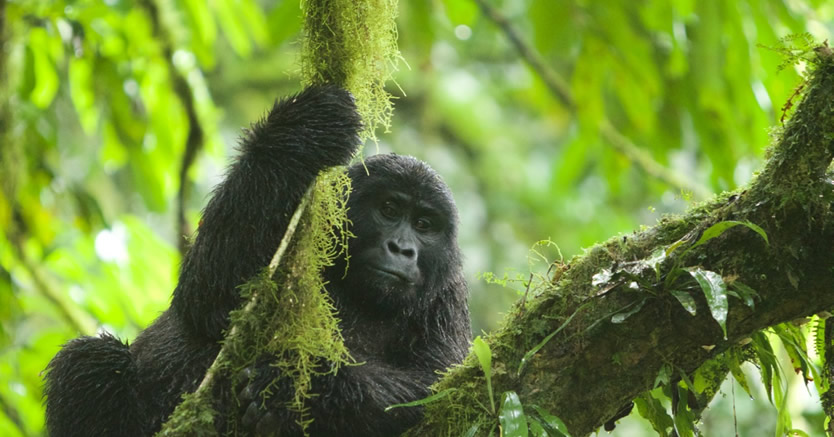 Located in Kisoro district southwestern Uganda, Mgahinga gorilla national park is the smallest national park in Uganda covering a total land area of 33.7 square kilometers. It was at first a forest reserve, which was garzetted in 1991 into a national park purposely to protect one mountain gorilla family that inhabit there. Concerning the vegetation cover, bamboo covers the largest portion of the park approximately 60%, there is also montane forest trees, grasses, mosses, lichens, liverwort giant tree heathers among others located in different vegetation zones. The diverse vegetation provides food and habitation for different animal and bird species in the national park. Travelers to Mgahinga gorilla national park mainly participate in the following activities:

Mountain gorilla trekking
Of the 13-habituated mountain gorillas in Uganda, Mgahinga hosts one family named Nyakagyezi. The family is led by a dominant silver back Mark and the whole family has a total of nine members. In the past decades, the family used to move crossing to the neighboring Democratic Republic of Congo and Rwanda. However, Nyakagyezi has presently settled in Mgahinga and is available for trekking. In addition, Just like in Bwindi national park, the gorilla permit is a must have for every trekker accessed from the Uganda wildlife authority at a cost of 600usd.

Advance booking gorilla permit is highly recommended and travelers spend an hour with the gorillas after which they go back to the starting point.

Hiking
Mgahinga gorilla national park is a home to three of the six-virunga volcanoes that mark the southern limit of the albertine rift valley. The volcanoes include;
Mount Muhavura, which is the highest standing at 4127 meters above the sea level. The summits of Muhavura provide travelers with a clear view of Bwindi impenetrable forest, Rwenzori Mountains, virunga volcanoes, lake Edward and other neighboring areas. Mount Sabinyo is the second highest standing at an elevation of 3669meters taking approximately 8 hours to reach the summit.

Mount Gahinga is the easiest to hike standing at an altitude of 3474 meters above sea level. Travelers spend approximately six hours to the summit of Mt Gahinga where there is a crater lake that has been filled by swamps and giant lobelia lucky climbers. Most travelers have now opted to hike any of the volcanoes during their visit to Mgahinga. There are high chances of interacting with wild animals such as golden monkeys, baboons among others.

Birding
Tourism in Mgahinga gorilla national park does not only entail animals but also consists of birds. There are approximately 180 bird species 12 of which are endemic to the national park. Among the birds spotted include white necked raven, black kite, paradise fly catcher, pin tailed whydah, speckled mouse bird, double collared sunbird, olive woodpecker, olive pigeon, blue headed coucal, alpine chat, dusky turtle dove, regal sunbird, stray seedeater, olive thrush, Rwenzori batis, and bronze sunbird among others. Concerning the best time for bird watching, from the months of April to May and then October to November is the best time. May and June are the nesting seasons whereas November and April are or migratory birds. Birders are recommended to come along with binoculars for easy spotting of birds from a far distance.

In conclusion therefore, the less visits to Mgahinga gorilla national park have kept the park natural and unique for adventurers. The experience is un comparable ranging from historical, cultural, natural and manmade features that make up a full travel package. Travelers should therefore visit the national park for an exceptional experience.