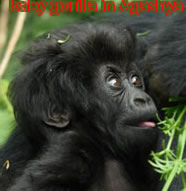 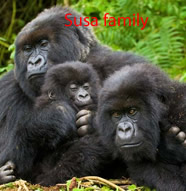 Trekking the Susa family is offers exciting moments especially as tourists watch the twin mountain gorillas jump and play around. Other gorilla individuals in the family have seen either feeding or relaxing around the thickets. 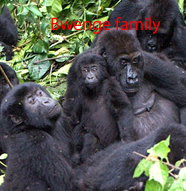 It mainly comprises of 11 mountain gorilla individuals. The family faced difficult times after the death of 6 young mountain gorillas. This gorilla family lives along the Karisoke volcanic area and it was named Bwenge after the dominant silverback.
Getting to this gorilla family is also a little challenging because it involves a hike of about 2 to 3 hours through the trails and steep slopes.

This gorilla family resides along the slopes of Mount Karisimbi and also among the difficult mountain gorilla groups to get to. This gorilla family can also be trekked by the physical ale bodied tourists because sometimes the gorillas move uphill making it hard to get to them by tourists. Trekking this family takes several hours and sometimes a full day.

To make the trekking a little easy, trackers first go to the jungles tracing where the gorillas are and are always able to tell where they (mountain gorillas) would be the next day. If they expect the family to be extremely far, it’s trekking is stopped. 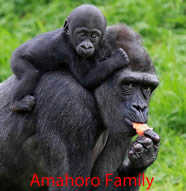 With 17 individual mountain gorillas, Amahoro is the most peaceful mountain gorilla family that also lives on a gentle slope. The word Amahoro means peaceful and the dominant silverback (Ubumwe) is indeed very peaceful. Of the 17 mountain gorillas in the Amahoro family, there is one silverback – Ubumwe, 2 black backs (sexually mature male mountain gorillas), 5 young ones, 5 female gorillas, and 4 youth mountain gorillas. Getting to this gorilla group is a little hectic because it also involves hiking however all the tourists who have visited the group always take about their unique experiences and encounters. 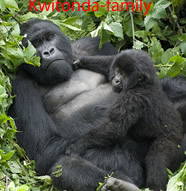 This gorilla family shifted from the Democratic Republic of Congo and it’s made up of 18 mountain gorilla members including Kwitonda the dominant silverback.
It’s among the difficult gorilla families to trek because it most times it keeps far away in thickly forested areas that can not be easily accessed by tourists. Kwitonda is a Kinyarwanda word that means the humble one that clearly describes the character of the group and the silverback. 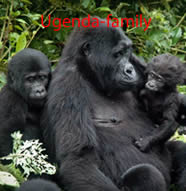 With a total of 11 mountain gorilla members, Ugenda family inhabits the Karisimbi volcanic area and has 2 silverbacks. This mountain gorilla family is also difficult to trek because it always moves from one area to another thus the name Ugenda that explains the family’s characteristic.