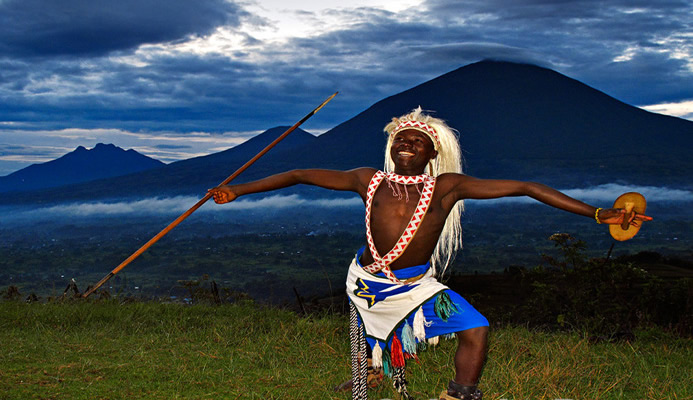 Rwanda is increasingly becoming one of the best travel destinations in Africa and in the whole world at large for safaris and holidays. Having put the dark history of the devastating genocide behind them, Rwanda’s recovery and progress in development is accelerating at a pace no one had imagined.

Tourism has been on the forefront of the factors that have hugely boosted the progress of Rwanda. The country is blessed with magnificent natural and artificial beauty which has attracted tens of thousands of visitors from all over the world to the Land of a thousand hills.

There is an almost endless list of holiday activities that you can enjoy while on your Rwanda safari but the following are outstanding and should be first on your Rwanda bucket list.

There are 10 habituated gorilla families in volcanoes national park with each family comprised of about 15-30 gorillas. A typical gorilla family in the park is made up of a few baby gorillas, several females, young males and one giant male as the leader of the family known as a silverback.

Trekking mountain gorillas in Rwanda requires to have a gorilla permit which is currently sold at $1,500 per person. A group of 8 trekkers is allocated to trek a particular gorilla family per day meaning a maximum of 80 trekkers can visit he gorillas on a single day in Rwanda

Due to the popularity of gorilla trekking among wildlife and adventure-loving travelers, the demand for gorilla permits is always high and therefore it is highly advisable that you book your permit in advance (at least 6 months) to avoid the last-minute disappointments.

Nyungwe forest national park is located in the southwest at Rwanda’s borders with Burundi and DR Congo. The park also comprises of the best preserved montane forest in Central Africa, the Nyungwe rainforest.

The presence of rainforest, bamboo, grassland, swamp, and bogs has attracted several primate species, birds and mammals into the park. chimpanzees are the most popular primates in the forest making chimpanzee tracking the major tourist activity in the park.

In addition to chimps, Nyungwe has also got a variety of other primates including the L’Hoest monkey, silver monkey, golden monkey, Rwenzori colobus, red-tailed monkey, dent’s Mona monkey, vervet monkey, grey-cheeked mangabey, the olive baboon, among others.

There are over 300 bird species in the forest with 27 Albertine Rift endemics. Some of the common birds in Nyungwe include the blue-headed sunbird, mountain sooty boubou, mountain alpalis, Stripe-breasted tit, red-collared mountain babbler, yellow-eyed black flycatcher, Rwenzori Batis, Rwenzori Turaco, among others.

Akagera national park in the eastern part of Rwanda is the country’s only savanna park and home to Africa’s famous big five. The park was named after the Akagera River that flows through it.

A game drive through Akagera will lead you to see all the big five including lion, buffalo, leopard, elephant, and rhinoceros. Other common mammals in the park include giraffe, zebra, hyena, hippos, cape bushbuck, bohor reedbuck, topi, oribi, impala, duikers, antelopes, among others.

Boat cruise in Lake Ihema within the park is also a fantastic activity to make you relax after a long game drive trip.

Boasting as the cleanest and the fastest growing city in Africa, Kigali has still got more to offer to those who dare to tour it. The Kigali city tour takes you to her several beautiful and amazing spots including the Kigali genocide memorial center, presidential palace, Inema art center, Niyo art gallery, Kimironko market, Nyamata Church, among others. The Kigali Convention Center is also very attractive to visit as a modern one-stop center for international conferences, meetings, incentives, and events.

Lake Kivu at Rwanda’s western border with DR Congo offers travelers the best relaxing atmosphere, especially after a tiresome gorilla trekking safari. Enjoy the breeze at the beach as you sunbathe and after chill, while you enjoy the fresh fish and later you can go swimming.

A boat cruise around Lake Kivu rewards you with amazing views of Rwanda’s rolling hills and several fishing villages along the lake shores.

Visiting the twin lakes
Lake Bulera and Lake Ruhondo are the twin lakes located at the base of Mount Muhabura near the Rwanda-Uganda border in the north. The lakes are divided by just a 1km strip of land mass that was formed as a result of volcanic activity when lava flew through River Nyabarongo and eventually dried up.

In addition to a relaxed and amazing boat cruise, you will meet local fishermen catching fish in their canoes while others use canoes to cross to their gardens that are separated by the lakes.

Participate in and enjoy local activities

There is a variety of local activities for you to try out your hand on in Rwanda. You can pick from the long list of exciting activities including visiting the handcrafts workshops, get involved in the basket weaving challenge or try your hand at learning how to cook traditional food.

You can also decide to take part in the monthly famous communal work “Umuganda” where locals meet every last Saturday of the month to do the cleaning, clear bushes, build homes for the elderly and construct roads and fences.

Getting entertained by the cultural Intore dancers is very exciting and eye-catching and you can as well stretch your muscles as you take part in one of the local marathons that are regularly organized to promote peace, unity, and fitness.

Lastly, if you are a lucky traveler and September gets in Rwanda, never miss the colorful and popular international ceremony of Kwita Izina (gorilla naming) where all the baby gorillas born in a year are given names. The ceremony is always attendant by well-known personalities from around the world who are given a chance to name the baby gorillas their preferred names.

The list of a traveler’s to-do list in Rwanda is endless but with the above selection of some of the best activities, we believe you will be well guided on how best you can maximize your holiday of safari in Rwanda.