Uganda is an English speaking nation located across the equator in East Africa. The country has a population of over 45 million people of which 80% live in rural regions. Those looking for rural Africa experience can find it in the ‘Pearl of Africa’ given that there are more than 50 indigenous tribes each with its unique set of customs including Batwa pygmies (keepers of the forest) and Ik Bushmen and Karamojong semi-nomadic pastoralists. In regard to biodiversity, Uganda has abundant wildlife including half of the mountain gorilla population, 13 species of primate species including chimpanzees, over 1000 species of birds, large mammal species including tree climbing lions, elephants, lions, cheetahs, hippo, Cape buffalo among others such as tropical fishes. Those intending to visit Uganda, the country’s main gateway is at Entebbe international airport on the northern shores of Lake Victoria. Entebbe town offers a variety of accommodations to stay at the end or start of your trip and explore the lake. The town is 36 sq.km (1-hour drive using express highway) to Kampala capital city in central region. The city is home to Buganda kingdom which forms the largest ethnic tribe in the country. There are several cultural and historical sites including Mengo royal palace, Kasubi royal tombs (UNESCO) and Uganda National museum; shopping centers and markets including national theatre and Buganda road arts and craft centers and banking and money exchange services at better rates. The mode of transport widely used is motorcycles (motor taxi) preferred by those intending to avoid road traffic jam.
Uganda offers a variety of things to see and do. Let’s look at some of the top travel experiences in 2022.

Given that Uganda is astride the equator which divides the earth into north and southern hemispheres offers a chance for photoshoots while on safari. The equator landmarks are found in Kayabwe along the Kampala-Mbarara highway, in Queen Elizabeth National Park and Entebbe town. 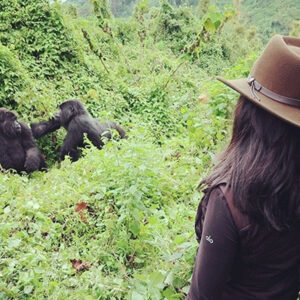 Given that mountain gorillas don’t survive in captivity, visiting them in the wild is considered as ‘a once in a lifetime’ wildlife experience. One of the undoubted highlights of a gorilla safari is coming face to face with a ‘Silverback Gorilla’. Weighing between 300 to 500 pounds, they are the largest primates in the world. Uganda is famous for harboring half of the world’s mountain gorilla population with 459 individuals in Bwindi Impenetrable Forest National Park (UNESCO world heritage site) which is almost half of 1063 world mountain gorilla population. The park has 22 gorilla families which is the highest number of habituated primates. You can make a choice between gorilla trekking and habituation experience.

Gorilla safaris in Uganda offers 8 visitors per day a chance to visit a fully habituated gorilla group for 1 hour both in Bwindi and Mgahinga Gorilla National Parks. Those intending to spend more time with the primates can do the Gorilla Habituation Experience – a process of making gorillas get used to human presence for tourism and conservation purposes. With the aid of trackers and conservationists, a maximum of only 4 visitors are allowed to participate in scientific research activities thereby spend 4 hours observing the wild gorillas. There are only two semi-habituated gorilla families in Rushaga one of the four Bwindi gorilla centers. Before confirming a gorilla safari, you should understand the gorilla rules and prepare your physical strength given that the nature of terrain can be challenging. 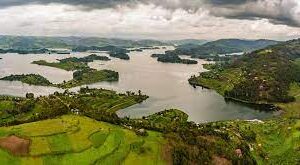 Lake Bunyonyi (the land of little birds) is in south-western Uganda 66 sq.km from Kabale municipality, 43 sq.km from Kisoro town, 112 sq.km south of Buhoma and 68 sq.km from Ruhija visitor centers in Bwindi Impenetrable Forest National Park. There’s a variety of accommodations along the lake shores which provides a chance to have ample time and relax after gorilla trekking adventure. The lava dammed lake has 19 islands and the scenery is spectacular for nature photographers. Canoeing is the mode of transport used to travel and transport goods to the markets between the islands. Given that the canoe doesn’t make noise, it offers a chance for spotting bird species and exploring the lake’s historic islands including the Punishment Island which is associated with a dark legend. Among the Bakiga people, it was forbidden for young girls to get pregnant before marriage. Those who were caught were punished by dumped them on the island. Some died from starvation and a few human remains still exist on another island given that punishment island is almost submerging. The custom was later condemned by Christian missionaries who visited the area including Leonard Sharp who established a leprosy treatment center on Bwama Island in 1930.

Believed to be second deepest lake in Africa, the depth of Lake Bunyonyi ranges between 40 – 900 meters. The water and papyrus vegetation attracts over 200 species of birds among other marine wildlife that are not dangerous to humans including crayfish (local specialty), African clawless otters, Lake Victoria and De Witte’s clawed frogs. Swimming in the lake Bunyonyi is safe given that there are no hippos, crocodiles and Bilharzia (snail fever). Inexperienced swimmers need to take caution due to the depth of the lake. Those who may not swim can ride a motorized boat ride tour or ride a traditional canoe. The length of the tour depends on the number of islands one wishes to explore. Most of the islands are inhabited and community walks, hiking and nature walks offer a chance to experience the rural lifestyle and culture of the Bakiga and Batwa pygmies. 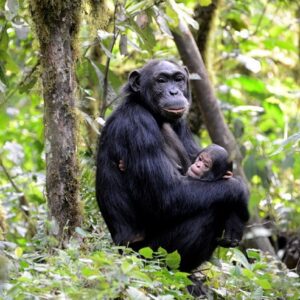 In addition to chimpanzee trekking, Kibale Forest offers opportunities for chimpanzee habituation experience (CHEX). This primate walk begins early in the morning before 7:00am at Kanyanchu visitor center. Visitors in a small group of 4 are accompanied by habituators into the forest searching where the chimps slept and closely follow them foraging all day until 7:00pm in the evening. This offers a comprehensive understanding of the ecology and behavior of chimps including their feeding habits and vocalizations. They forage and build their nests both in tree canopies and on forest ground. For that reason, a high zoom camera and binocular may be required for keen photographers. Chimpanzee habituation permit cost is $250 per person available for booking through Uganda Wildlife Authority (UWA) and tour operator.
On the other hand, chimpanzee trekking offers 1 hour to spend with chimpanzees both in Kibale, Kalinzu, Kyambura gorge and Budongo forests. The chimp trekking permit cost is $200 at Kibale, $60 for Kilunzu and Kyambura gorge and $80 at Kaniyo-Pabidi eco-tourism site in Budongo Forest Reserve. The day of the trek needs adequate preparation including what to wear and pack for chimp trekking. Given that the movement of chimps is not predictable at the start of the trek, physical strength is required due to nature of terrain and time likely it takes to find the primates. 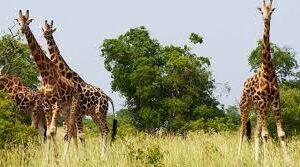 A trip through western circuit offers a chance to visit three of 4 Uganda’s savannah protected areas including Murchison Falls, Queen Elizabeth, Lake Mburo National Parks and Ziwa Rhino Sanctuary for those intending to see rhinos in Uganda. The parks offers game viewing activities including day and night game drives, boat cruises and guided bush walks. Hot air balloon safari is available only in Murchison falls. There are possible encounters with large mammals including African elephants, Cape buffaloes, Nubian giraffe (Rothschild’s giraffe), plains zebras, hippos, crocodiles and predators such as lions, leopard and spotted hyena. Tree climbing lions are found in Ishasha wilderness area southern part of Queen Elizabeth National Park. Plains zebras and impalas are only found in Lake Mburo in the western region. This park has no elephants and offers unique game viewing activities including walking safari, biking and horseback riding. The communities around consist of Ankole long horn cow keeping Bahima people and can be visited for cultural tour. By contrast those intending to see cheetahs on Uganda safari must travel to Kidepo Valley National Park where the scenery is different. The protected area is in the semi-arid wilderness Karamoja north-eastern region 571 sq.km (11- hour drive from Kamapala capital city). The park can be combined with Pian Upe Wildlife Reserve for maximum off-the-beaten path game viewing experience with a chance to spot desert adopted wildlife that are not found anywhere in Uganda including cheetah, ostrich, Aard wolf, roadn antelope, bat-eared fox, striped hyena and white-eared kob.

The Nile is the longest river on earth with estimated length of 6693 sq.km (4132 sq. Miles). The main source of the Nile is found in Jinja city eastern Uganda where the river begins to flow from Lake Victoria (Africa’s largest freshwater lake) and ends in Mediterranean Sea. Murchison falls the strongest waterfall along the river is 384 sq.km (5-hour drive) north-west of Jinja. The source of the Nile was put on the global map in 1858 by John Hanning Speke. The explorer’s monument stands on the riverbank for those intending to re-enact his journey while exploring East African region along with others including Emin Pasha (German naturalist) who lived near Lake Albert in the wilderness of Toro-Semuliki Wildlife Reserve. Given that Semuliki is an extension of the Great Congo basin Ituri rainforest, perhaps Pasha a naturalist may have been attracted to its geothermal hot springs and central African bird species on their eastern range limit. The boat cruise to the source of the Nile offers a chance to stand on a small rocky island where the river spills from the Victoria waters. 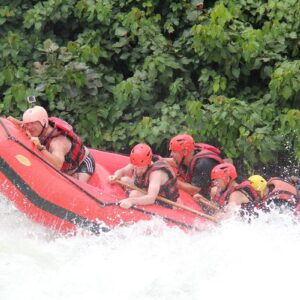 The 2-hour boat ride is an opportunity for birding due to a variety of water birds including malachite kingfisher (the most beautiful bird on the Nile) among others such as African fish eagle, pied wagtail and great blue turaco. The site on the bank of the river offers lots of souvenirs, camping, nature walks and visiting a traditional herbal healer for his stunning metaphysics. Furthermore, Jinja is the ‘Adventure Capital of East Africa’ due to a variety of activities including white water rafting, bungee jumping, all terrain quad biking, horseback riding, sport fishing, lake Victoria sunset cruises among others. The local communities and the city itself can be explore to learn about the local culture including visiting the reptile village, shopping and nightlife. Motor cycles (boda boda) offers a better way to beat traffic and cover large distance over the area.

Gorilla Trek Africa is your best guide to explore Uganda the Pearl of Africa. We offer tailored Uganda safari packages to trek gorillas,game viewing, chimpanzees, culture, mountain hiking and birding experiences among others offering you a lifetime experience.