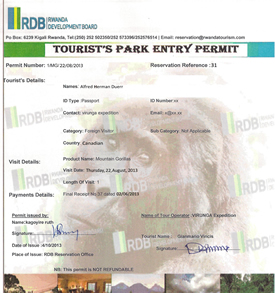 Rwanda has made a name as the best gorilla trekking destination, and early this year the small beautiful land locked country shocked the whole world by when the government decided to double the price of gorilla permits from $750 to $1500 for 1 person for go trekking gorillas in Volcanoes national park for 1 hour.

On the other hand the Uganda government assured the public that they were not planning on increasing the price of gorilla permit at least in the next two years. Gorilla permits in Uganda still cost $600 per person during peak season and $450 in the low season and Democratic Republic of Congo, gorilla permits go for $450 Per Person.

Given Rwanda’s history of the horrible genocide the claimed millions of people, the country is internationally admired because of her effort and ability to put the horrors of the 1994 genocide behind and embrace a peaceful future with our any anger and blame towards one another.
For many travelers to Africa, Rwanda is a must visit destination and gorilla trekking a must do activity and a visit to the Kigali genocide memorial site. With a hike of the gorilla permit prices, numbers of tourists are slowly going down opting for cheaper gorilla destinations like Uganda and the Democratic Republic of Congo.

For many tour companies in Rwanda; the hike of the gorilla permit has been seen as a mistake. As we get towards the end of the year, tourism in Rwanda is going down with less travelers going to the country even those who used to come to visit other attractions have gone down, while others arrive from Rwanda and cross the neighboring countries to visit with a belief that everything else in Rwanda is very expensive, where as the price for other attractions are still going for the same price.

According to Clair Akamanzi, CEO RDB “the rise of gorilla permits was a decision well thought by the key stakeholders in the tourism and conservation industry of the country. Hiking the gorilla permits price is one of the ways Rwanda is positioning itself as a high-end tourism destination in Africa. To top with the desire to cut the population pressure the volcanoes national park was facing as so many tourists preferred her over other destinations.