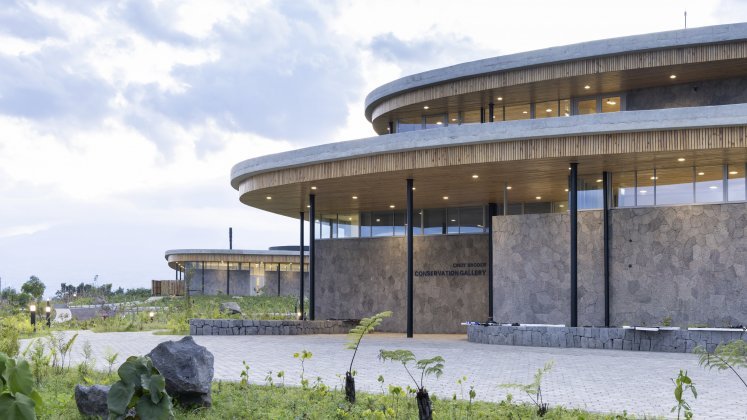 Rwanda Development Board has finally inaugurated the Ellen DeGeneres Campus of the Dian Fossey Gorilla Fund in Rwanda located in Volcanoes National Park. The campus Chief Executive Officer and founder Ellen DeGeneres in the company of her wife Portia de Rossi with whom they have been married for the past 13 years graced the Inauguration of the campus worth $15 million . The Inauguration came a few weeks to the start of the long awaited 2022 CHOGM scheduled for June 2022 in the Kigali Convention Centre. Ellen DeGeneres was so much excited about the official inauguration, something that brought her childhood dream to reality. In her speech, Ellen detailed how she has had a longtime passion towards the conservation of mountain gorillas and the whole area. Ellen DeGeneres told the media about her longtime dream of coming to Rwanda to support the works of her hero, Dian Fossey who dedicated her life to save the endangered mountain gorillas that were at the verge of extinction mainly to the poachers. The inauguration was also attended by prominent people who include Michael Murphy, the founder of MASS Design, Minister Rt.Hon Edouard Ngirente the Rwanda Prime Minister and Clare Akamanzi the CEO of Rwanda Development Board.

Named after its founder “Ellen”, the campus covers 12 acres of land. Ellen DeGeneres Campus is located in Volcanoes National park aimed at promoting and conserving the endangered mountain gorillas in Rwanda and the entire Virunga Conservation Area. The construction of the campus started way back in 2019 but was opened to visitors in February 2022. Reports show that the campus receives more than 5000 visitors in a month. The Ellen DeGeneres campus focuses on creating educational space for students, tourists, community member’s and researchers inspiring them to learn and promote a lifetime of conservation.
The campus emphases on teaching school children about gorilla conservation, educating a future generation of scientists and also transforming from sustainable architecture to the community’s involvement.

Structures at the Ellen Campus 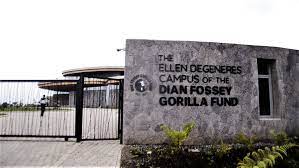 The Ellen Campus comprises of three main buildings, which include the Sandy and Harold Price Research Centre, the Cindy Broder Conservation Gallery and Melani Walton Education Centre. The Ellen campus also entails housing for students and researchers visiting the site. All the constructions and architecture was done by the MASS construction company, which mainly used local labor and raw materials to avoid profit repatriation.

Established in 1978, the Dian Fossey Gorilla fund is a non-profit organization in Rwanda, which was founded by Dian Fossey, the American primatologist who sacrificed her life to save the endangered mountain gorillas in the Virunga Conservation Area. The fund was founded solely to fund Fossey’s campaigns and activities focused on promoting sustainable gorilla conservation and tourism in Rwanda and the neighboring countries. The foundation was initially called the “Digit Fund” but was later in 1992 renamed after its founder Dian Fossey who lost her life to save the gorillas. Digit was Dian Fossey’s favorite mountain gorillas, which was killed by poachers in 1977. The fund also manages the Karisoke Research Centre, which was also established by Dian Fossey in 1967.

Rwanda, the Land of a Thousand Hills is one of the must visit travel destinations in Africa. Despite her small size, the country offers a long list of interesting attractions and activities to travelers seeking adventure and relaxed experiences. Gorilla Trek Africa, the number one safari company offers you guided Rwanda safaris at discounted rates. Some of the things you must do in Rwanda include:

Done in Volcanoes National Park, mountain gorilla trekking is the number one travel activity done by most travelers to Rwanda. The country is second to Uganda in hosting the highest number of mountain gorillas in the whole world. Each gorilla permit in Rwanda costs $1500, which allows travelers to spend an hour with the endangered gorillas. Rwanda Development Board together with the African Parks manages gorilla safaris in Volcanoes National Park. Each day, the park has 80 gorilla permits available.

Also done in Volcanoes National park, golden monkey trekking is a not miss on your Rwanda safari. The lively and playful creatures give you exciting moments as they tirelessly jump over you across tree branches. The permit to trek golden monkeys is $100 but it’s worth it.

Go game viewing to see the “big five” and other wild animals in Akagera National Park. Located in eastern Rwanda, Akagera is the only savannah park in Rwanda where game drives take place. Expect to see a variety of wild animals, which include Lions, Leopards, Elephants, Buffalos, Rhinos, Giraffes, Zebras, Oribis, Waterbucks, Warthogs, Hyenas, Topis, Duikers and Bushbucks among others. Game viewing is best done in the morning and evening hours when wild animals are actively hunting and grazing.

The two experiences are done in Nyungwe Forest National park located in the southwestern part of Rwanda. Chimps are endangered primates who share over 98% of human genes making them man’s close relatives. The canopy walk entails visiting walking on a suspended bridge 60 meters above the forest offering you great aerial views of the forest, Virunga volcanoes and local communities.
In conclusion, the opening and inauguration of Ellen DeGeneres Gorilla Fund in Rwanda is a great achievement as far as tourism is concerned. We celebrate the success!