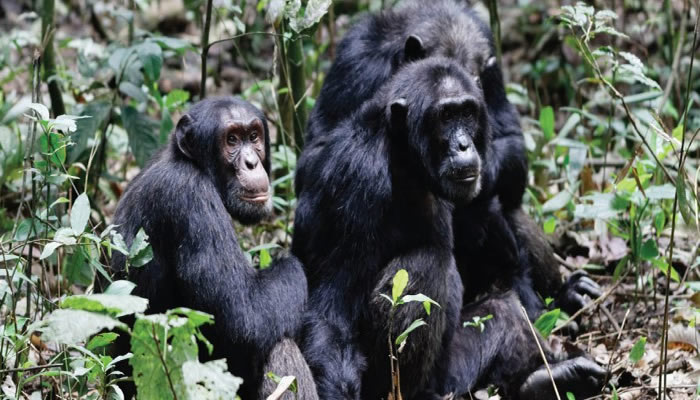 Chimpanzee trekking in Uganda may make fewer headlines in the news compared to the breathtaking mountain gorillas safaris, but visiting human closest relatives in a Ugandan jungle is indeed one of the world’s most amazing wildlife encounters and more so the cost is just a quarter of that of gorilla trekking. Chimpanzee tracking in Uganda gives a rare glimpse of some of 300,000 chimpanzees that live in Africa’s equatorial rainforests. Kibale forest national park is the best place to track chimps in Uganda with the forest having up to five habituated groups that are easily accessed within a walkable distance.

Unlike mountain gorillas that are less in number, chimpanzees live in broader communities of up to 150 members. The large groups are divided into smaller subgroups each led by an alpha male.

Chimps like spending most of their time while hanging high up in the tree branches as they feed on fruits, leaves and tree backs and accompanied by playing and sleeping.
You enjoy the real fun with the chimps when they descend down from the treetops as you can easily get closer to them.

Scientific research has proved that chimps together with gorillas are human’s closest genetic relatives among all other wildlife sharing up to 98% of man’s DNA.

Thanks to the great work done by Dr. Jane Goodall, a celebrated primatologist who first studied and established the human-like behavior of chimps. Through her study of the primates, Dr. Goodall established that chimpanzees kill and eat small mammals and they are also capable of using tools. Such discoveries were about chimps were new at the time.

Dr. Goodall also initiated habituation of chimpanzees, a process of making chimps get used to humans and she started by introducing herself to them. Today, due to habituation, tourists have the opportunity to get so close and interact with these intelligent apes.

Kibale forest is Uganda’s primary home of chimpanzee hosting about 1,500 of them. There are up to 13 chimp groups in the forest of which some like the Kanyanchu group have been successfully habituated for tracking by tourists.

The Kanyanchu group has got over 120 members and they all under the leadership of one giant alpha male, Totti (named after Francisco Totti, former Italian striker). Totti took over leadership of the group in 2016 from the previous alpha, Magezi.

There are both morning and afternoon arranged visits to the Kanyanchu group. This visit lasts for 3-4 hours including a full hour spent in the presence of a crowded chimp family.

Chimpanzee trackers pay $150 per person for this activity and this is just a fraction of the gorilla tracking cost of $600 in Uganda’s Bwindi Impenetrable National Park and $1,500 in Rwanda’s Volcanoes National Park.

If you want to enjoy more time with the chimps, a habituation experience is offered at $220 per person to follow one of the two chimp groups that are undergoing the process. Taking part in this encounter is so rewarding as you walk with these primates within a touching distance though you may need to stretch your legs a bit as chimps can move fast.

Both the morning and afternoon visits allow you enough time to locate the chimp group and enjoy a breathtaking hour in their company.
Before setting off into the jungle, there is a simple briefing in which you are told some facts about the chimps as well as some dos and don’ts while tracking.

Some of the rules include not getting too close to the apes to avoid spreading any infections given a shared DNA, not imitating their calls as it may just attract their anger upon you.

After the briefing, trackers are divided into groups of 8 each accompanied with an armed ranger to cater for emergencies, and now it’s time for the great encounter.

The guide will lead you in a direction where the apes were last seen as you push through the tangled undergrowth, bending under low tree branches and watching your feet for twisted roots and logs.

Meeting the chimps face to face

As you move on, you will suddenly start to hear their harsh, high-pitched screams as family members call each other. This should alert you that you are not far away from meeting your sought-after stars.

Not far away, you start to meet some subgroups playing in treetops or feasting on figs and if it’s your lucky day, you meet the real magic so early as some will have come down to greet you.

You will first hold your breath for a few seconds as you get into your first, up-close chimp encounter with just a few feet between you and these amazing wild creatures.

Soon you will be taken aback by what you see, their intelligence, funny poses, and human-like expressions and interactions. With no fear, they look straight at you with their bright eyes, gladly pose for pictures and at the same time directing some calls at you.

Coming face-to-face with a wild chimpanzee is one of the breathtaking wildlife experiences. Gorilla tracking may top Uganda’s attractions list but this encounter is a very bit as amazingly exhilarating.

One would choose to track chimps over gorilla trekking given the cheaper cost, easier terrain, less dense forest and the ease of finding chimps in close proximity.