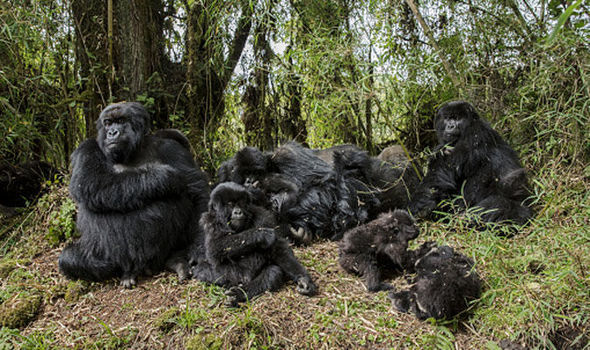 Three arsenal players have taken part in this year’s gorilla naming ceremony locally known as “Kwita Izina” which literally means giving a name. The three players included club captain Pierre-Emerick Aubameyang, goalkeeper Bernd Leno and defender Hector Bellerin. Unlike the previous gorilla naming ceremonies that have been taking place in Rwanda at the country’s gorilla home of Volcanoes National Park, this year’s ceremony was conducted online due to the Coronavirus pandemic. This year 24 baby gorillas were named including those named by the Arsenal players.

How the players named gorillas
Each of the 3 players gave one bay gorilla a local name in Kinyarwanda language with Aubameyang naming his “Igitego” which means goal. Igiteko was born on July 5, 2019 and he is a son of Pasika from Mafunzo family. Hector Bellerin named another baby gorilla “Iriza” which means first born. She was born on October 11, 2019 to Igihembo from Kwitonda family. Bernd Leno named his baby gorilla “Myugariro”, which means defender. Myugariro was born on September 28, 2019 to Kubaha from the Amahoro family.

In total there were 24 baby gorillas that were named in this year’s ceremony which is 16th of its kind. The annual ceremony attracts global attention to the importance of gorilla conservation. The trio was not the first individuals from the arsenal family to take part in Rwanda’s gorilla naming ceremony with others including club legends like Tony Adams, Alex Scott and Lauren having done the same in the past. Other popular individuals who have participated in the activity before include naturalist Sir David Attenborough, model Naomi Campbell, actor Natalie Portman, among others.

Arsenal and Visit Rwanda partnership continues to thrive
The participation of the 3 Arsenal players in this year’s gorilla naming ceremony was part of Visit Rwanda’s partnership with the Premier League as the club’s official tourism partner and sleeve sponsor. The deal which started two years ago aims at promoting tourism in Rwanda especially gorilla trekking which is the country’s leading tourist attraction.

Gorilla naming ceremony held despite Coronavirus pandemic
This year’s gorilla naming ceremony was in doubt whether it could be held due to the Coronavirus pandemic but the organizers decided to go on with it against all odds though this time it was celebrated virtually. Rwanda Development Board (RDB) Chief Executive Officer Clare Akamanzi said they decided to hold the ceremony virtually due to the pandemic.

“2020 has been a difficult year, but in spite of Covid-19, we have made Kwita Izina special in two ways, by holding it virtually due to the pandemic and giving the people that spend a lot of time caring about the endangered species the privilege to name the 24 babies,” said Akamanzi.

This year’s ceremony coincided with World Gorilla Day, the day American Primatologist and conservationist Dian Fossey established the Karisoke Research Center in northern Rwanda in 1967 to promote awareness and conservation of these endangered species.

Trekking mountain gorillas in Rwanda
Rwanda reopened for gorilla trekking and other tourist activities in June after the sector had been closed in march to control the spread of Covid-19. Rwanda’s gorilla trekking is sold at $1,500 per person for foreigners but the country cut the price to $500 for foreign residents till December 2020.
Gorilla Trek Africa is your best guide for Rwanda gorilla trekking safaris