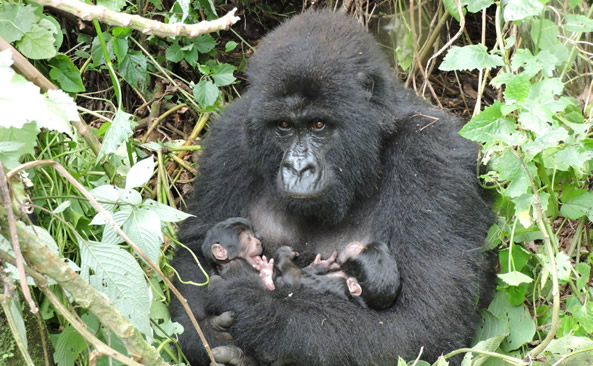 2 Baby Gorilla Born in Virunga National Park
There is a great joy, excitement, and rejoicing in DR Congo’s Virunga national park following the birth of two baby gorillas. The newly born babies were discovered on 26th July 2018 by the national park rangers who were doing their daily work of checking all gorilla families to ensure they were all dong well. The baby gorillas were born in Rugendo and Humba families, which bring family members 30 and 15 mountain gorillas respectively. The 19 years old kayenga is a new other in Bageni family while the 8 years old Anangana is a new mother in the Humba family. Altogether, nine baby gorillas have been born in Virunga national park, which is a great achievement. Also, the birth of baby gorillas is good news to the tourism industry since gorilla tracking is the major source of foreign exchange for the Democratic Republic of Congo. Virunga national park is one of the four national parks that shelter the endangered mountain gorillas in the whole world. The national park covers the Congo’s share of the Virunga conservation area alongside Volcanoes National park in Rwanda and Mgahinga Gorilla National park in Uganda. The birth of baby gorillas brings hope for sustainable Congo gorilla tours giving future clients a chance to meet and interact with these endangered species in their natural habitat.

Virunga national park is Africa’s oldest national park, which was gazetted in 1952 and is also known as the most biologically diverse protected area in Africa.
The park spreads over 7,8000 square kilometers bordered by Rwanda and Uganda. At first, the new birth of baby gorillas was celebrated in Mgahinga gorilla national park but was later realized that babies belonged to Virunga national park. The two national parks border each other and some times mountain gorillas roam across the borders of the two parks.

Virunga national park is a home to the quarter of the world’s mountain gorillas habituated in 10 gorilla families to ease habituation. At present, 8 gorilla group are available for trekking in Virunga national park which are kabirizi family, Rugendo family, Humba family, Lulengo family, Mapuwa family, Nyakamwe family, Bageni family and Munyaga family. Just like in other gorilla national parks, each gorilla family is visited by 8 people for an hour. Interestingly, gorilla permits in Congo are less costly compared o Uganda and Rwanda. A single gorilla permit in Congo costs 450usd, which is much cheaper compared to 600usd in Uganda and 1500usd in Rwanda.

Threats to gorilla tourism in Congo

Unlike in other gorilla countries (Rwanda and Uganda), gorilla tourism in the Democratic Republic of Congo is highly hindered by civil conflicts. Rebel groups that hide in the park have continuously hindered tourism activities especially gorilla trekking and Nyiragongo Volcano hiking in Virunga national park. The recent kidnap was in May 2018 where two Briton travelers were kidnapped while a park manager killed by unknown gunmen who then disappeared in the jungle. The plans to open up some regions of Virunga national park for oil drilling is also a big threat to the

The state of gorilla safaris in DRC

Presently, there are no gorilla safaris running in Virunga national park. The park was closed in May 2018 following the kidnap of tow Briton travelers and the killing of the park ranger by armed rebels. All safaris were postponed to 2019 to create enough time for accurate investigations regarding security and put strategies to avoid related incidences.
In general, the birth of baby gorillas in Virunga national park is worth celebrating. Newborn gorilla babies bring hope for sustainable gorilla tourism in the Democratic Republic of Congo hence a continuous flow of foreign exchange to government and memorable gorilla trekking experience to the travelers.