Here is everything you need to know about gorillas in Africa including their history, behavior, subspecies, conservation, families and where to trek gorillas in Uganda, Rwanda and the Democratic Republic of Congo with Gorilla Trek Africa. Gorillas are the largest extant species of primates. They are ground-dwelling, predominantly herbivorous apes that inhabit the forests of central Africa. The DNA of gorillas is highly similar to that of a human, from 95–99% depending on what is counted, and they are the next closest living relatives to humans after the bonobo and chimpanzee. 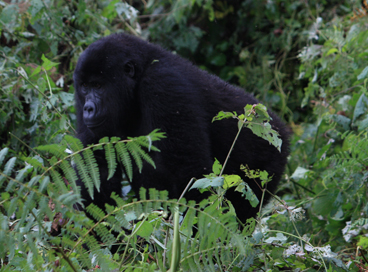 The closest relatives of gorillas are chimpanzees and humans, all of the Hominidae having diverged from a common ancestor about 7 million years ago

The first systematic study about Gorillas was not conducted until the 1920s, when Carl Akeley of the American Museum of Natural History traveled to Africa.

After World War II, George Schaller was one of the first researchers to go into the field and study primates. In 1959, he conducted a systematic study of the mountain gorilla in the wild and published his work.
Years later, at the behest of Louis Leakey and the National Geographic, Dian Fossey conducted a much longer and more comprehensive study of the mountain gorilla.

It was not until Dian Fossey published her work that many misconceptions and myths about gorillas were finally disproved, including the myth that gorillas are violent.

Until recently there was considered to be a single gorilla species, with three subspecies: the western lowland gorilla, the eastern lowland gorilla and the mountain gorilla. There is now agreement that there are two species with two subspecies each. More recently it has been claimed that a third subspecies exists in one of the species. The separate species and subspecies developed from a single type of gorilla during the Ice Age, when their forest habitats shrank and became isolated from each other.

A gorilla’s day is synchronized, divided between rest periods and travel or feeding periods. There are dietary differences between and within species. Mountain gorillas mostly eat foliage such as leaves, stems, pith, and shoots while fruit makes up a very small part of their diet. They primarily eat bamboo.

Eastern lowland gorillas have a more diverse diet which varies seasonally. Leaves and pith are commonly eaten but fruits can make up as much as 25% of their diet. Gorillas rarely drink water “because they consume succulent vegetation that is comprised of almost half water as well as morning dew”, although both mountain and lowland gorillas have been observed drinking.

Gorillas live in groups called troops. Troops tend to be made of one adult male or silverback, multiple adult females and their offspring. All tourists on mountain gorilla tour in Uganda / Rwanda enjoy meeting these gentle Giants in groups as one family.

However, multi-male troops also exist. Silverbacks are typically more than 12 years of age and named for the distinctive patch of silver hair on their back which comes with maturity.

The silverback is the center of the troop’s attention, making all the decisions, mediating conflicts, determining the movements of the group, leading the others to feeding sites and taking responsibility for the safety and well-being of the troop. Younger males subordinate to the silverback, known as blackbacks, may serve as backup protection. Blackbacks are aged between 8 and 12 years of age and lack the silver back hair.

Gorillas construct nests for daytime and night use. Nests tend to be simple aggregations of branches and leaves about 2 to 5 feet in diameter and are constructed by individuals. Gorillas, unlike chimpanzees or orangutans, tend to sleep in nests on the ground. The young nest with the mother but construct nests after three years of age, initially close to that of their mother. A gorilla’s lifespan is between 35–40 years, although zoo gorillas may live for 50 years and more. Gorilla tracking is considered more safe in Uganda and Rwanda though the DR Congo is slowly gaining a secure situation to track gorillas.